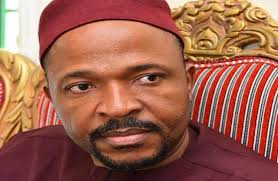 There are now clear indications that Minister of State for Education, Hon.Emeka Nwajiuba will run for Okigwe Senate seat.

Nwajiuba has not officially declared for the position but sources close to him said there is nothing wrong if he decides to vie.

” Is there anything wrong if he decides to contest. Is he not eminently qualified to contest” a close associate to the Minister stated.

The Minister was among key stakeholders of Okigwe zone who converged at the country home of a political leader in the area, Tony Chukwu, recently to brainstorm on ways of shopping for replacement of late Senator Benjamin Uwajumuogu.

innonews - September 25, 2017 0
Imo State Governor, Rochas Okorocha has been speculated to be eying the Vice Presidential ticket of the All Progressive Congress, APC in 2019. Newspaper reports...

innonews - March 23, 2019 0
The National Youth Council of Nigeria, NYCN, Imo State has refuted reports in some sections of the media...

Konga Rolls Out Loans To Merchants Ahead Of Yakata 2019

innonews - October 17, 2019 0
Foremost e-Commerce giants Konga has taken a step further towards making the 2019 edition of its Yakata sales an unforgettable experience...