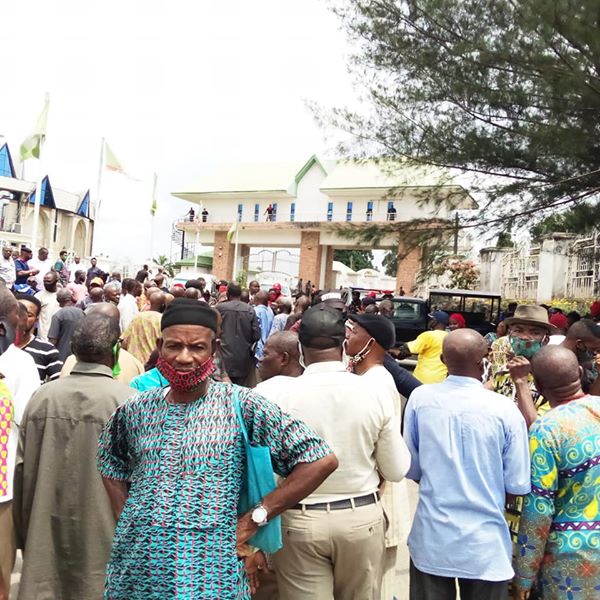 There has been widespread condemnation on the flogging of pensioners in Imo State who were on protest at Government House gate on Tuesday, August 4, 2020.

The Pensioners however have reacted, threatening that the hoodlums who flogged them during their protest at Okigwe road round about, close to Government House, Owerri, have just dug their graves.

One of the pensioners, Ebenezer Ibekwe, told journalists “Thugs were flogging us, their fathers and mothers. I pity them because they have dug their graves. At Warehouse junction, while we were coming, they accosted us and poured water on us. This has never happened in this State before.

On Tuesday, August, 2020, pensioners for the fourth time in two months took to the streets of Owerri, to protest non- payment of pensions. They usually gather at Okigwe road round about leading to Government House, Owerri for such protest.

But the latest protest turned sour for the men and women of yester years, who came in their numbers to demand non payment of their pensions and gratuities.

However, things went out of hand when some thugs came out from vehicles, formed a barricade and stopped the pensioners from getting close to the Government House main gate.

When the men and women of yester years defied the thugs, the latter resorted to flogging them.

While this ugly scene continued, a detachment of policemen led by an Assistant Commissioner of Police, A.J Moses, came to the scene and promptly dispersed the thugs.

The top cop later appealed to the pensioners.

In his reaction, the Imo State Commissioner For Information and Strategy, Mr. Declan Emelumba, did confirm that the state government has paid the pensioners the arrears they were craving for, but admitted that some of them do have issues which is being sorted between the state government and the state leadership of the NUP.

innonews - June 1, 2018 0
*From Don Umunna, Abuja* Leaders and stakeholders of the All Progressive Congress, APC in the South East, met in Abuja yesterday where all members of...