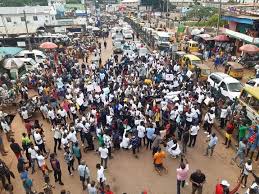 The Endsars protest in Owerri, Imo State capital may have forced appointees of government to go into hiding for fear of molestation and harrassment by the protesters.

Governor Hope Uzodinma has however imposed a 24 hour curfew in the State, a move geared towards checkmating the protests which has gone violent in some parts of the country.

Uzodinma in a broadcast said some opposition elements intend to infiltrate the protesters.

This newspaper observed that most appointees of government amd members of the State House of Assembly before the curfew was announced avoided areas the protesters were, ostensibly to avoid any form of molestation.

The End SARS protest in Owerri had began last week and had continued unabated.

Mainly orchestrated by youths, they are calling for police reforms, and recently included an end to bad governance as part of their slogan.

The protesters in their hundreds had converged at the ware house junction on Tuesday for the third day, making it difficult for commuters to ply adjoining roads.

The road blockade led to traffic gridlock in many parts of the State capital.

Imo State Governor, Senator Hope Uzodinma, had on Monday set up a judicial panel of inquiry, to look into allegations of police brutality against citizens of the State.

innonews - March 2, 2019 0
BY:POLITICAL UNIT, INNONEWS.COM.NG Two major factors are likely to play out during the governorship election in Imo State...