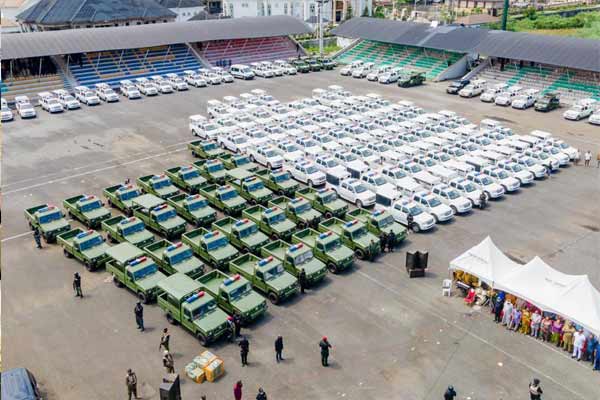 Governor of Imo State, Senator Hope Uzodimma has flagged off the Armed Forces exercise that would help bring sanity in the State ahead of the Yuletide tagged Operation  “Golden Dawn” with a promise to support the leadership of the security agencies succeed in the three months assignment.

The headquarters of the Operation is at Super Camp Orlu, in Orlu LGA, Imo State.

In his address while flagging off the ceremony on Wednesday, Governor Uzodimma commended the security Agencies for their vision in creating the Centre to address the peculiar nature of the security situation in the South East zone and Imo State in particular.

Governor Uzodimma said: “This is a special period and season in the lives of not only Christians all over the world but  the people of South East who are predominantly Christians coming back for the celebration of Christmas which usually starts from October to December.”

He reasoned that “the exercise would go a long way in improving on the security situation in the South East region and also give our people sense of security and further encourage our brothers and sisters who are resident abroad to come home because the area is safe and secure.”

The Governor acknowledged that it is a great achievement on the side of the security agencies, hence “they should be commended, encouraged and supported.”

He reiterated that Operation Golden Dawn is an exercise that will create an enabling environment for people to go about their businesses without fear of molestation.

To the officers and men of the Armed Forces, the Governor thanked and assured them that Government will continue to stand by them, encourage and support them.

He acknowledged the sacrifices the agencies of the Armed Forces have made and are still making to secure Imo State and assured them that “government will show sufficient appreciation at the appropriate time.”

In his brief welcome address, the Commander 34 Artillery Brigade Obinze, Brigadier General R.T. Utsaha explained that “Exercise Golden Dawn” is meant to “build on the gains so far recorded over the menace of IPOB and ESN by the security agencies so far” and that all “security agencies are involved in the exercise.”

He noted that the aim of the exercise is to further secure lives and property of the people of the South East in general and Imo in particular and to reassure citizens of the South East returning for the Christmas celebration of adequate security. He said the Operation will start in October and end December 31, 2021.

He informed that troops of the Operation Golden Dawn will be quartered at Orlu for the rest of the year to ensure that socio- economic activities in the region and Imo State in particular will continue to take place unhindered.

Highlights of the occasion was the inspection of Guard-of-honour and the premises housing the troops by Governor Uzodimma.

innonews - April 15, 2019 0
John Obi Mikel has said he was not satisfied with Middlesbrough’s display, despite a 1-0 win over Hull City in their Championship game...