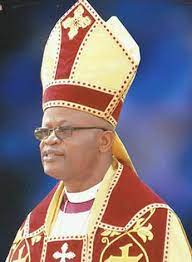 In a statement, the cleric described the invasion, as unprecedented in the 160 years history  of the church in the state.

“Much as we are not concerned or interested in the reason for this invasion, which is unprecedented in the more than 160 years history of the church in this state, we are gravely worried and disturbed that worshippers were greatly frightened, worried, confused and completely disorganized by the presence of heavily armed security operatives in the church service thereby disrupting the worship of God’s people.

“That the police jumped inside the church in a gestapo style when the service was in full session is reprehensible, primitive, and highly condemnable. We are at a great loss why the police decided to throw caution to the winds and completely ignore internationally acclaimed rules of engagement and civility in this matter”

The Bishop noted that “the sporadic gunshots outside the church building sent worshipers scampering in different directions, signaling an abrupt and chaotic end of the service.

“While the church is in support of and have always  been praying for the success of our security personnel in the daunting task and challenge of securing lives and property in our dear state and every effort at bringing the perpetrators/sponsors of this crime against humanity to book no matter how highly placed, we warn that such acts as the one in issue are capable of worsening the security challenges we are currently facing.

He said the Church will engage the Nigerian Police “in a dialogue to truly understand the reasons behind this dastardly act and how to avoid a repeat occurrence. While this process is on, we urge all Christians to continue in prayers for God’s mercy on all of us and peace in our land” the statement stated

innonews - April 18, 2022 0
The senatorial ambition of business mogul, Prince (Dr) Alex Mbata, is on course as top leaders of Owerri Zone have demonstrated their...