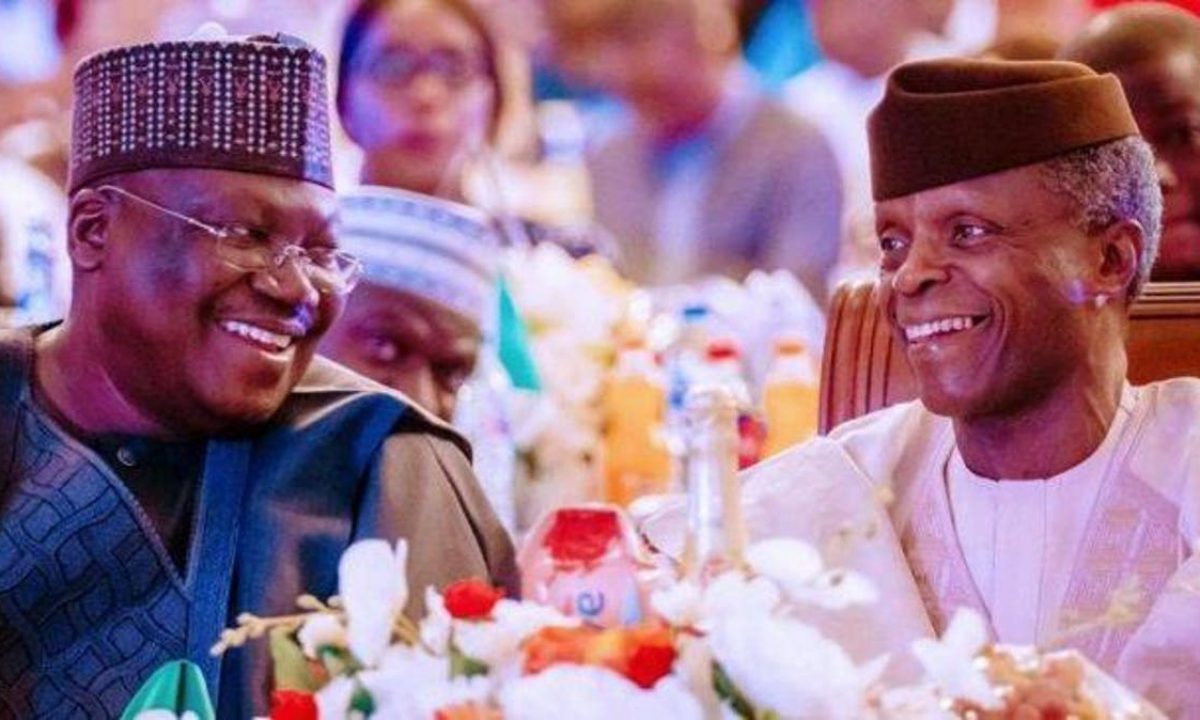 President Buhari had last week at a meeting with APC State Governors at State House, Abuja said he should be allowed to choose his successor.

Some APC State Governors and Senators are strongly behind the Senate President.

With 13 presidential aspirants cleared and 10 disqualified from the contest by the Screening Committee chaired by former Edo State Governor, John Odigie Oyegun, there are clear indications that Osibanjo and Lawan have emerged the two major contenders.

With Primaries set to kick off on Monday, party sources said “The two aspirants, Lawan and Osibanjo are in pole position to emerge presidential candidate of the APC, but Lawan seems to have the cutting edge.

“Those pushing Lawan’s bid have succeeded to get the nod of power brokers close to Buhari to back the Senate President for the party’s presidential ticket.

“And with the emergence of Atiku Abubakar as PDP presidential candidate, the permutations has changed in the APC. Only a strong candidate in the mould of Lawan, being a Senate President from the North can diminish Atiku’s political prowess. And the powerful cabal surrounding Buhari, have convinced the President” a source said.

Another reliable source however said with the mood of the nation which makes it imperative for a President from the South to succeed President Buhari, there are also feelers that Vice President Osibanjo, is also in contention for the party’s presidential ticket.

“Osibanjo seems to be favoured, assuming a Presidential candidate for the APC from the South is considered.

“And I can tell you that Asiwaju Bola Tinubu, may have an inkling that Buhari and powers that be may have settled for the Vice President.

“This triggered his outburst on Buhari and Osibanjo at Abeoukuta, Ogun State, where he interacted with delegates” the source said.

Tinubu had taken a swipe at Buhari last week, recalling that he aided him to become President in 2015 after three failed attempts.

Kashim Shettima, a former Governor of Borno State and an ally of Tinubu, had told Channels tv on Friday, that “nice men like Osibanjo should be selling ice cream”

This unfolding development in the APC leaves the South East in the dark.

A top party chieftain told this newspaper on Friday that “Some presidential aspirants from the South East such as Ogbonnaya Onu, Emeka Nwajiuba, were really on the radar of Buhari and his close allies, but some fresh permutations have altered these calculations”

Imo APC: Another Round Of Crisis Looms

innonews - June 26, 2018 0
The crisis that has ravaged the All Progressive Congress, APC in Imo State for a long time  may not be over with the Former...

innonews - June 16, 2022 0
Perseverance and diligence to Journalism profession has continued to attract goodwill for Mr. Onyekachi Eze, as he has added another award to...

innonews - September 24, 2019 0
The Imo State Government has taken proactive moves to fight ghost workers in the Local Government system. Below...