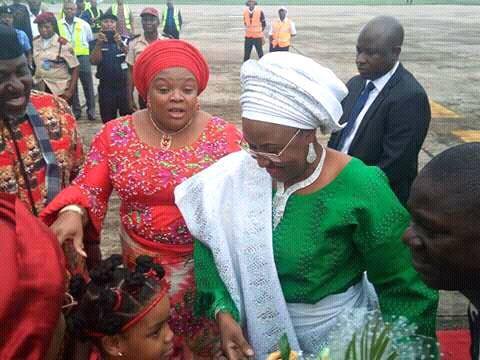 In her brief speech at the overcrowded event, the President’s wife, said there is need for peaceful co-existence among Nigerians and said that women have always remained the agents for such peaceful co-existence. She said Nigeria’s oneness should be dear to every Nigerian and told the women to be in the forefront of the campaign for oneness of the Nation.

Her words, “the theme of this year’s August Meeting “Women Building Bridges of Friendship Across the Niger” is apt, the idea of organizing this event annually where women come together to share views on how to improve on socio-economic situation of our states and nation is quite commendable particularly on conflict resolution and need for peaceful co-existence”.

She added, “I also see this gathering of women as a celebration of womanhood. This August annual meeting is important as it provides opportunity for people from the Northern, Eastern and Western parts of the nation to come together not only for social purpose but to dialogue and exchange ideas on developmental issues as well as proactively work for unity amongst Nigerians”.

She thanked the governor for giving women a sense of belonging in the state by recognizing their achievements and worths in nation building”.

Governor Okorocha in his speech asked Nigerians to continue to pray for the unity of the nation and also pray for President Muhammad Buhari and for all those who believe in the unity of this nation, adding that anyone saying anything outside this Unity is indeed on his or her own, and remarked that Nigeria must remain a united country.

Governor Okorocha commended the women in this country for building the bridge of unity across the nation irrespective of the political affiliations of their husbands, describing Nigerian women as those who have remained united in the fight for peaceful co-existence in Nigeria.

The governor further remarked, “Our nation is going through a trial moment, a moment that many great nations of the world had passed through before getting to their point of greatness Nigeria definitely will not be a exemption. We are only passing through the moment and not living in the moment. Nigeria will be better not too far from now”

The host, and wife of the Imo governor, Nneoma Nkechi Okorocha in her welcome address, said the 2017 August Meeting with the theme “Building the Bridges of Friendship Across the Niger” is special in every dimension and important because of their desire to promote Unity, Friendship and Love, knowing that the strength of any society lies in the Unity of the populace.

For her “Unity is the chord that ties families, communities, states, tribes, and nations together. From time, it is crystal clear that as women, we have always been charting the course of the unity or co-existence of the nation. And we must continue to build the bridge of Love and Unity among Nigerians as mothers”.

innonews - June 13, 2018 0
Tragedy struck at Irete Autonomous Community in Owerri West Local Government Area of Imo State when a man suspected to be a non indigene...

innonews - August 12, 2019 0
Senator Samuel Anyanwu, has alleged that certain forces at the federal level within the ranks of the PDP conspired to...

Pressure On Ohakim To Join APGA

innonews - October 13, 2017 0
Unconfirmed reports say that a former Governor of Imo State, Chief Ikedi Ohakim may be on his way to the All Progressives Grand Alliance,...

Imo 2019: Situating The Ihedioha Factor In The Rejuvenated PDP

innonews - October 16, 2017 0
BY CHIBUIKE ONYEUKWU# The resurgence of the Peoples Democratic Party, PDP in Imo State cannot be complete without pointing at the consistent and remarkable role...