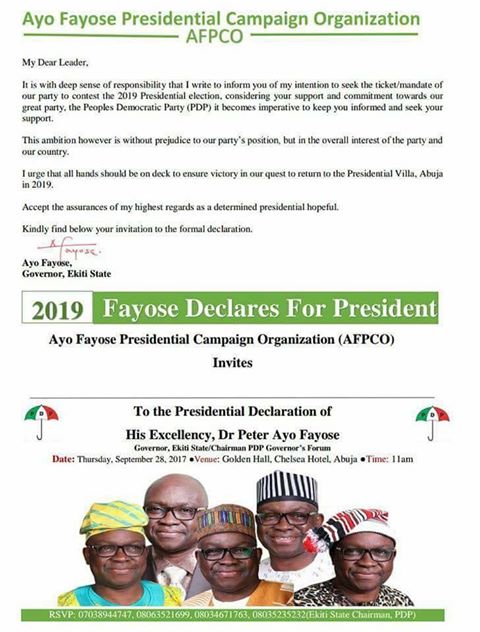 The Peoples Democratic Party, PDP has dismissed the presidential ambition of one of its governors.

Ayodele Fayose, governor of Ekiti State had declared his intention to vie for the Nigerian Presidency in 2019.

National Publicity Secretary of the PDP, Dayo Adedeye was quoted to have said that the PDP has already zoned the presidential ticket to the Northern part of the country. Fayose is expected to announce his intention to run for the Presidency Thursday after posters of his declaration surfaced on the social media.

The party scribe said Fayose is only eligible to contest for the office of the national chairman of the party which has been zone to the south.

innonews - February 26, 2021 0
BY EVEREST EZIHE The recent victims of wanton burning and destruction  of houses and properties in Oguta Amaeshi ancient...

innonews - May 18, 2017 0
The 2017 Federal budget was recently approved by the National Assembly. In the 2016 budget, Imo federal lawmakers were assigned some projects for their...

No Justice Commissioner Appointed In Imo

innonews - December 7, 2017 0
Of the 28 commissioners sworn in by Imo State Governor, Rochas Okorocha, no one was appointed commissioner of Justice and Attorney General of the...