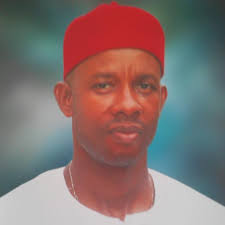 The Majority Leader, Imo State House of Assembly, Hon.Lugard Osuji has described himself as the happiest lawmaker in the House.

Osuji who represents Owerri Municipal State Constituency said he is happy because Governor Rochas Okorocha of Imo State has carried out unprecedented developmental strides in the area, a feat he said was never achieved by all past governments in the State.

He said Owerri municipal has benefited in areas of infrastrucure more than any other local government in Imo State since the inception of the present government.

Speaking at a rally of the All Progressive Congress, APC Owerri Municipal chapter, Osuji said Okorocha gave Owerri people six inland roads and constructed several projects that has made Owerri to compete with other capital cities in the country.

Osuji said with the support of his  colleagues in the Assembly, he has been able to initiate result oriented Bills that has benefited the people.

He called on his people to continue to support the APC and the Okorocha administration, urging them to shun the opposition PDP who are desperate to return to power.

Earlier, Chief of Staff, Government House,Owerri, Chief Uche Nwosu urged the people of Owerri to continue to support the Okorocha administration. He urged party members to remain loyal to the party.

In his speech,Deputy Speaker, Imo State House of Assembly, Hon.Ugonna Ozuruigbo said Hon.Osuji is very passionate about his people. He said the lawmaker is a huge asset to the House of Assembly and urged them to support him always.

The event was witnessed by party chieftians, some lawmaker and wife of the Speaker of the Imo State House of Assembly, Mrs Ihim.

How Nnamdi Kanu Was Arrested, Tortured In Kenya- Special Counsel

innonews - July 15, 2021 0
Details emerged yesterday how leader of the proscriped Indigenous People Of Biafra, IPOB, Mazi Nnamdi Kanu, was arrested and tortured in...

innonews - December 4, 2017 0
A top politician in Imo State, Major General Sunday Chikwe has dumped the Peoples Democratic Party,PDP for the All Progressive Congress,APC He made the declaration...

innonews - July 14, 2021 0
BY RALPH EJIMKONYE Imo State has lost temporarily, its quest to have some oil wells ceded to it, after...

‘The gods Of Owerri Zone Have Ordained Alex Mbata Next Senator’-...

innonews - October 26, 2022 0
As the 2023 Owerri zone senatorial elections draws near, traditional rulers in Owerri zone last week, announced their decision to endorse the...