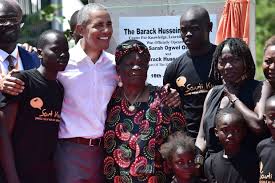 The Former US President, Barrack Obama on Monday visited his father’s ancestral village in Kenya’s South-western Siaya County.  He met with his grandmother since after leaving office and they danced together to some of their traditional music.

He came to launch a youth center set up by his half sister Auma Obama.

Kenyan television showed the former U.S. president pulling his grandmother Sarah Obama, clad in traditional garb, onto the dance floor and getting down to some music.

Immediately Obama arrived in the country on Sunday, he met with President Uhuru Kenyatta, who tweeted “It was great to welcome you back @BarackObama.”

He later moved to South Africa on Tuesday to give a key speech on Nelson Mandela’s centenary- his first public speech since leaving office.

innonews - July 10, 2019 0
The Debt Management Office, DMO, has released 25 Trillion naira debt profile of the Federal Government and that of 36 States of...

IAC Reveals To Uzodinma What To Do With His SAs, SSAs

innonews - September 4, 2020 0
Barcelona and Argentina captain, Lionel Messi, has said he is not quitting his boyhood club, FC Barcelona. He said...