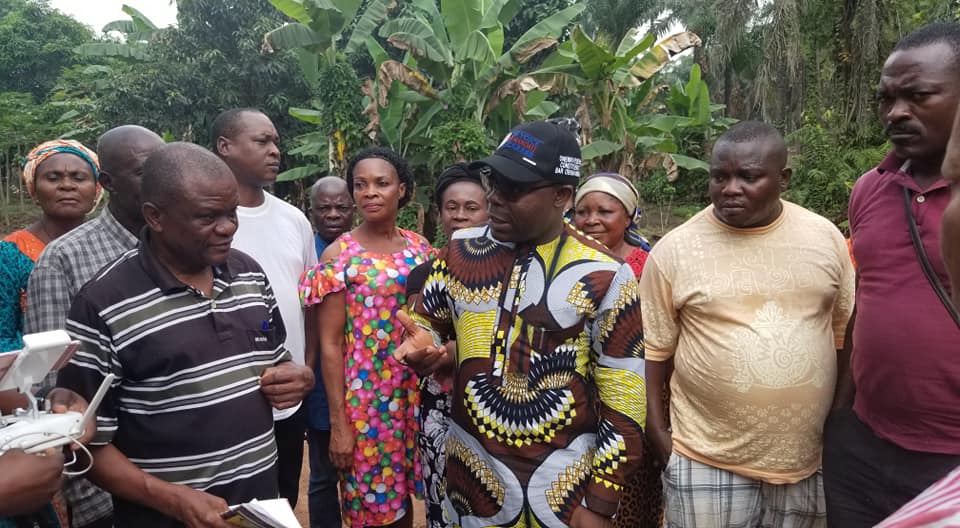 Mbata recently attracted the renovation of a bridge in Umuebeh in Ezimba/Emii Autonomous community in Owerri North Local Government Area of Imo State.

The bridge has been in bad shape after it was destroyed more than 40 years ago during the Nigeria civil war.  It was a major thoroughfare and access to two communities in two local governments (Owerri North and Aboh Mbaise LGAs) and a source of transportation for agricultural produce.

Since the bridge was destroyed, the road became impassable save for foot traffic that was made possible by locals in the community who put in place wodden craft over the river.

Mbata in a post on his facebook wall said the renovation of the bridge  was part of the ongoing Rural Access Mobility Project (RAMP) of the Government of Imo State.

His post reads  “I had the privilege, this morning, to accompany Engr. Basil and his team to the bridge at Umuebeh (in Ezimba/Emii autonomous community of Owerri North LGA) as part of the on-going Rural Access Mobility Project (RAMP) of the Government of Imo State.

“The said bridge connects Emii ancient community of Owerri North, with Umuhu in Aboh Mbaise LGA. According to stories narrated repeatedly by the members of the community, the road that the bridge bestrides was a major thoroughfare and access to the 2 communities in the 2local government areas and a source for transportation of agricultural produce.However since the bridge was destroyed during the civil war, the road had become almost impassable save for foot traffic made possible through effort of the community by putting wooden raft over the river. The loss of the bridge had of course, and as confirmed by the locals, gradually but surely impacted negatively on this largely agrarian community.

“Thus, their joy and happiness was without bounds on seeing the team of engineers who I came with from RAMP for the purpose of getting soil for analyses as well as getting other relevant data preparatory to commencement of work on the bridge.

“The RAMP project is under the auspices of the World Bank and the French Development Agency and is aimed at improving rural access and mobility in other to stimulate and engender economic development in our rural areas.

“I had the privilege of attracting this particular project to Emii ancient community during my tenure as Hon. Commissioner for Finance in Imo State and it goes in line with my vision going into politics, that politics is about service, and upliftment of our people and communities.

He said the renovation of the bridge is a tip of the iceberg of what his constituents in Owerri Municipal, Owerri North and Owerri West will expect when they elect him as their representative to the House of Representatives. He said there are lots of similar projects to be attracted to the area when he gets to the green chambers.

He wrote further “I intend to uphold this tenet if I have the opportunity of getting to serve the great people of Owerri Federal Constituency at House of Representatives come 2019 as the APC candidate. The satisfaction that comes from knowing you have put joy in the heart of another is invaluable.

“I wish the engineers Godspeed as they embark on this project and thank our Governor Owelle Rochas Okorocha, for giving me an opportunity to serve, and to attract this project to ndi Umuebeh, Emii and Owerri North as a whole. There are lots of projects that still need to be attracted to our areas.

“Let me be your voice, let me be your mandate in our Owerri Federal Constituency come 2019. We all would surely be the better for it!

innonews - July 7, 2021 0
The United Movement For A New Nigeria, has tackled the National Assembly for the "removal of the electronic transmission of election results...

innonews - March 29, 2020 0
There is anxiety in Owerri, Imo State capital, as 41 guests and workers of a hotel have been quarantined by the Imo...

innonews - September 26, 2021 0
There are moves to get some top leaders of the Peoples Democratic Party, PDP, to cross over to the ruling All Progressive...