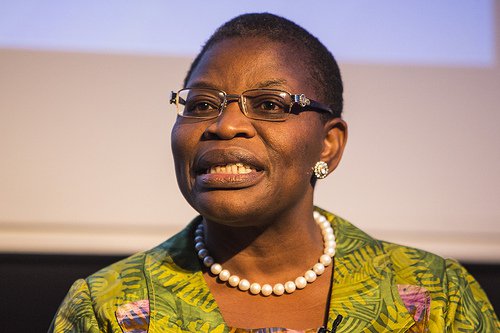 Few hours after she announced her withdrawal from the presidential race, Dr. Oby Ezekwesili’s Allied Congress Party of Nigeria, ACPN has declared support for the re- election of President Muhammadu Buhari, presidential candidate of the All Progressive Congress, APC.

The Party’s National Chairman and running mate to Ezekwesili, Alhaji Ganiyu Galadima at a press conference in Abuja, said they are surprised with the action of Dr. Ezekwesili.

He accused Dr. Ezekwesili of using the ACPN platform to negotiate for a ministerial position in the next political dispensation, saying she did not consult them before withdrawing from the race which was a move to preempt the decision that the party would have reached after its meeting on Thursday.

Dr. Ezekwesili had in a statement on Wednesday said she stepped out of the Presidential contest to aid in building a Coalition to defeat the APC and PDP in the February 16, 2019 election.

Galadima however pointed out that they intended to withdraw her candidacy and give to somebody else.

“She only preempted the decision we would have reached today which was to withdraw her candidacy and give to somebody else.

“Our presidential nomination ticket is N10 million and expression of interest is N500, 000 but when she came she said she did not have money, that she only had N100, 000 and because we wanted to encourage women, we gave her our platform”, said Mr Galadima.

” The ACPN has declared it’s support for the reelection of President Muhammadu Buhari of the All Progressives Congress APC, ” he said.

innonews - April 20, 2018 0
Arsenal Coach, Arsene Wenger says he will quit the club at the end of the season.

Okereke And Journey To The Green Chambers. BY OKEY ONWU

innonews - April 14, 2018 0
High Chief Justice James Okereke (Igodo) has distinguished himself in many ways. Those who know him say he is a gentleman to the core.The...