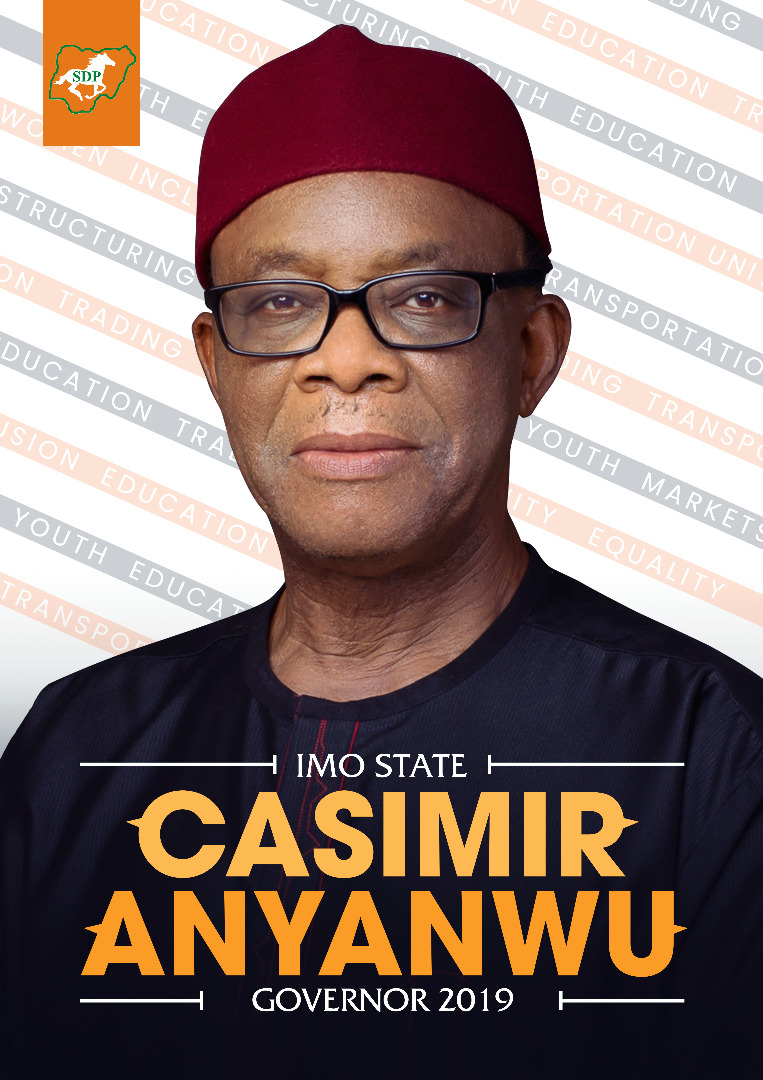 The Commitee To Elect Casmir Anyanwu, has taken to the cleaners Chief Okey Ezeh for peddling falsehood over the Supreme Court judgement on the governorship ticket of the Social Democratic Party, SDP, Imo State.

According to a statement signed by Ndukuba Charles, the Commitee debunked claims made by Chief Ezeh that he floored Dr.Casmir Anyanwu in his purported victory at the Supreme Court in the disputed Imo Social Democratic Party (SDP) government ticket.

According to the statement ” Okey Ezeh and his lying propaganda machine are at it again. They have, once again and true to their character, attempted to pull the wool over the eyes of the unsuspecting public”

“We wish to debunk the false hood peddled in the claim of Okey Ezeh that he floored Dr Casmir Anyanwu in his purported victory at the Supreme Court in the disputed Imo Social Democratic Party (SDP) Governorship ticket. Okey Ezeh and his lying propaganda machine are at it again. They have, once again and true to their character, attempted to pull the wool over the eyes of the unsuspecting public. In a strange and bizarre new mathematical model designed by this strange group; ONE IS GREATER THAN FOUR.

“In the Supreme Court ruling of Friday, July 12, 2019, Okey Ezeh had told Imolites and the world that the minority opinion of one, that of Hon Justice Mary Odili is superior to that of the lead judgement and three of other justices (four). That lead judgement read by Hon Justice Paul Galumje upheld the ruling of an Owerri Federal High Court declaring Dr. Casimir I. Anyanwu as the rightful SDP Guber candidate for the 2019 general election. Okey Ezeh’s propaganda machine chose to highlight (and indeed published) the dissenting opinion of one judge at the expense of the majority ruling of four other Justices.

“This is the character and personality of one who would want to be trusted with the affairs of the good people of Imo State. Imolites have just witnessed such characters at the Douglas House where night is day, hot is cold, white is black, etc. Why did this deceptive gang of robbers chose to publish only the opinion of one dissenting judge? Why did they also not publish that of the majority of four judges as read by Hon Justice Paul Galumje? They could not do so because they are corrupt and deceptive. By rushing to the Press with false information, they thought the world would not discover the truth.

“Last week some Owerri based tabloids were awash with the propaganda without doing the due diligence of investigating the veracity of the claim before signing up with him to mislead the public with false reporting. This is the ugly side of our media practice.

“We wish to state without any fear of contradiction that Okey Ezeh true to nature launched into a deliberate false hood to deceive the unsuspecting public in his usual desperation to claim the governorship ticket of Imo SDP by hook or crook. The Supreme Court Judgement was never given in his favour and we challenge him to publish the lead judgement which awarded him the victory that he is claiming.

“Restating the facts the truth remains that Dr Casimir Anyanwu fulfilled all electoral requirements to emerge the governorship candidate of the SDP. At the time Okey Ezeh was never a member of the party and ran for the guber ticket of the All Progressive Grand Alliance (APGA). He lost out and joined to form the new APGA which guber candidates went to court to challenge the candidature of the party’s flag bearer. He was challenging the APGA governorship ticket and at the same time attempting to hijack Dr. Anyanwu’s mandate

“While in that fight he went to compromise the national leadership of SDP to ‘steal’ the governorship ticket of Dr, Anyanwu which was promptly challenged at the Federal High Court Owerri and Anyanwu regained his mandate to fly SDP flag as its standard bearer in the 2019 Imo governorship election. When he (Ezeh) challenged the decision of the FHC, the Appeal Court for whatever reason known to them ruled that the matter be retried at another court even when it was clear at the time that the case has suffered lapse of time.

‘This is a pre-election matter which was filed at the Federal High Court Owerri on the 24th October, 2018. By Section 285(10) of the Constitution of the Federal Republic of Nigeria 1999, the Federal High Court was mandatorily required to deliver its judgement within 180 days from the date of filing the suit. The lower court’s (Appeal Court) judgement was delivered on the 4th of May, 2019. At the time the lower court’s judgement was delivered the trial court (Federal High Court) no longer had jurisdiction to hear and determine the case since the constitutional period available for it to hear and determine pre-election matter had lapsed.

‘From the date the petition was filed at the Federal High Court and the date the lower court (Appeal Court) delivered its judgement was precisely 192 days. Clearly the lower courts (Appeal Court) order for retrial was made in error, since the trial court (Federal High Court) no longer had jurisdiction to hear and determine this case.’’ The Supreme Court further described the suit as academic, theoretical for which a court should on no account spend judicial time. The Supreme Court in its judgement again ruled, ‘I am of the firm belief that the appeal has clearly become an academic exercise and this court cannot waste its precious time attending to it. The first issue for determination is accordingly resolved in favour of the Appellant.’’

The matter was heard by five Supreme Court Justices four of whose judgement tallied with the lead judgement excepting that of Justice Mary Odili, which Okey Ezeh relied upon to make his spurious claim. It is very clear his desperation has no limit and he became so blinded that he has to throw caution to the wind to misrepresent realities. The judgements are published in another page of this paper. We challenge Okey Ezeh to refute these facts.

We call on the general public to ignore him and his manipulated claims and to note that his several desperate attempts at stealing what does not belong to him was stoutly and roundly resisted. You cannot steal from a man who is very much awake

Controversy Over IBB’s Statement On Buhari

innonews - February 5, 2018 0
There is controversy over former military president, Gen Ibrahim Babangida (retd) statement on President Muhammadu Buhari. The ex President had in a statement released by...

innonews - October 5, 2017 0
The sum of N16.7 billion naria has been released by the Federal Government for the construction and rehabilitation of four major projects in the...

Governor Ihedioha: I Will Hit The Ground Running

innonews - May 29, 2019 0
BY: IKENNA ORIOHA Governor Emeka Ihedioha has promised to hit the ground running on assumption of office as the...