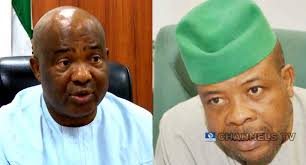 The Supreme Court has declared Senator Hope Uzodinma of the All Progressive Congress, APC as duly elected Governor of Imo State.

In a uniamous judgement by a seven man panel of Justices led by the Chief Justice of Nigeria, Tanko Mohammed, held that Ihedioha was not duly elected.

Justice Kudirat Kereke- Ekun who read the judgement declared Senator Uzodinma as the valid winner of the governorship race held in Imo State on March 9.

The nation’s apex court ordered the immediate withdrawal of the Certificate of Return that was issued to Ihedioha.

It also ordered that a fresh certificate be issued to Uzodinma and he should be sworn in as Governor of Imo State.

innonews - March 16, 2021 0
The Ohaneze Youth Council, has commended Governor Hope Uzodimma on his achievements in office in the past one year, but strongly advised...