Home Uncategorized Senatorial Re Run: Okigwe Elders Say No To Imposition Of Candidate 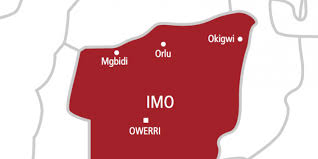 Worried by lack of peace and unity of purpose among politicians of Okigwe Senatorial zone in Imo State, which has often led to betrayal and lack of development of the Senatorial zone and as a strategic measure to move the area politically forward, the people under the auspices of Okigwe Elders Forum have resolved that hence forth there will be no imposition of candidate on elective political positions but rather a collective decision of the people. will prevail.

They made this resolution barely two days after the burial of Rt. Hon Benjamin Uwajimogu, the distinguished Senator who represented the Senatorial zone and died last December while still representing the zone in the Senate under the political platform of All Progressives Congress (APC) even as the Independent National Electoral Commission (INEC) is yet to announce a date and schedule for the re-run of the senatorial election.

Eze Ohanwe who said the essence of the meeting is to ensure the sustenance of peace, brotherly love and unity of purpose within the Senatorial zone and the need to caution politicians against pull him down syndrome, jealousy and betrayal as well as harmonizing themselves to ensure that the people truly participated in electing their representatives.

The renewed traditional ruler who said he has no personal interest among all the aspirants, however advised on the need for equity, justice, truth and to throw his support towards meritocracy and patriotism.

Hon. Emeka Nwajiuba the Minister of the State of Education said he gave 100 percent support to the idea and vision of the Okigwe Elders Forum and enjoined his kinsmen to do the same, noting it as the only idea that will eschew political rivalry, rancor and acrimony.

For Chief Longers Anyanwu, one time Federal Commissioner, noted the crux of the matter to be peace, brotherly love and unity of purpose among politicians of the Senatorial district, noting that the area is eminently blessed with natural resources and human capacities.

Anyanwu further identified the problem of the Senatorial zone of coming from Mbano ancient clan saying that no man should be an Island and further called for the spirit of forgiveness and tolerance among the political class.

He also appealed to the traditional rulers on the need to maintain mutual love and understanding while thanking the Forum for organizing and mobilizing for the meeting and called on the need to give the state government maximum support and co-operation.

While Hon. Chike Okafor, representing Okigwe South Federal Constituency in the House of Representatives advised on the need to write to His Excellency, Senator Hope Uzodinma, the Executive Governor of Imo State thanking him for appointing one of their illustrious sons Chief Cosmos Iwu as the Secretary to Imo State Government as well as the support so far given to their patriotic son Rt Hon Chiji Collins, the Speaker of the State Assembly and the need to make a press statement asking Rt. Hon. Emeka Ihedioha, the 2019 Governorship candidate of PDP to withdraw his Supreme Court Review judgment saying that the matter is a distraction to the state and its lean economy.

But Barr. Emma Ihediro, the National Organizing Secretary of APC disclosed that the money being spent at national politics is overwhelmingly sourced from South East States noting that in the States of North East or North Central that with N20 million you can comfortably vie to be Senator while you will spend over one Billion to contest similar election in any states of the South East.

Ihediro decried the issue of undue politicking among politicians of the Senatorial zone and also appealed to the leadership of the forum as well as the Traditional Rulers council on the need to positively repositioned the Senatorial zone in the overall interest of the populace.

In his reaction, His Eminence Chukwuemeka Uche, the Prelate of Methodist Church of Nigeria said he is not in the meeting as a Prelate but rather as one of the sons of the Senatorial zone and as a stakeholder who is aggrieved over the marginalization of the zone and its self-inflicted retrogression in-terms of growth and development.

Uche decried lack of quality and effective representations of the zone by previous representatives and stated his resolve to participate in ensuring that patriotic people with integrity and pedigree are elected to represent the zone subsequently.

The Prelate reiterated his interest in producing a credible candidate that would represent the zone in the Senate saying that he is not afraid of death after all anybody that killed him will definitely inherit hell.

He maintained his resolve to support any government in power saying that it is a divine directive and prayed for the wraths of God to be against any person or group that would again work against the interest of the senatorial zone.

Adding his voice, Chief Tony Chukwu, the Chief host charged the people to publicly condemn any person or group that has been responsible for the political retrogression, bickering, wrangling and betrayal of the Senatorial zone to stop forth with or face serious sanctions from the populace.

Chukwu popularly known as “Onweghi ihe kariri chineke” (nothing pass God) also challenged royal fathers of the zone to take a stand on how the Senatorial zone should restore peace, brotherly love and unity of purpose as against pettiness, jealousy, back biting and imposition.

According to him “No single individual own the zone and therefore no individual have the capacity to impose a candidate on the people. The problem of the senatorial zone is from Isiala Mbano but the unanimous decision of the Senatorial zone must be sacrosanct.

The Senatorial zone is the architect of its own destiny. Henceforth, the new order is that the peoples decision must be supreme. No longer individual decision but collective resolution and support” he stated.

The multi-billionaire business czar turned political godfather further reported that for now he has no aspirant he is supporting and vowed not to participate in politics again if the emergence of a candidate is not based on the collective decision and support by the overwhelming majority of the people.

According to him, “The people must decide who will go to the Senate for them not Chief Tony Chukwu, Senator Godwin Ararume, Chief Ikedi Ohakim or anybody deciding. I am tired of imposing candidates, it has yielded no result, now let the people decide and lets watch”, he advised.

The highlights of the meeting was a minute silence given in the honour of the deceased and passing of a motion seeking the mandate of the people directing the Elders Forum to write a thank you letter to Governor Hope Uzodinma for appointing their son, Chief Cosmos Iwu as the Secretary to the State Government and followed it with an official visit of presenting the demands of the Senatorial zone. Secondly, a letter to President Muhammadu Buhari, thanking him for appointing their son Hon. Emeka Nwajiuba as Minister State of Education and their daughter, Princess Gloria Akobundu as the National Co-coordinator of NEPAD.

The motion was moved by Rt. Hon. Acho Ihim, the immediate past speaker of Imo State House of Assembly and was supported by Princess Gloria Akobundu and there was no dissenting voice when it was thrown to the floor.

The meeting which recorded who is who in Okigwe Senatorial zone have in attendance over 3000 personalities among whom are Prof. A.C. Nwebo, Senator Mathew Nwagwu, Dr. Mike Anyaeze, Ambassador Eddy Onuoha, Hon. Patrick Ndubueze, Prof. Nnamdi Obiaraeri, Sir Mike Uchendu, Barr. Ifeanyi Agwu who was piloting the affairs and Hon. Mrs. Rubby Emele among others.

The people expressed happiness and showered praises to HRH Eze Oliver Ohanweh and Chief Tony Chukwu for being patriotic in the progress and development zone.

Why Ikenga Ugochinyere Should Be Arrested- Imo State Govt

Iwuanyanwu: I Never Said I Regretted Voting For Owerri Man As...

innonews - March 20, 2021 0
Elder statesman, Chief Emmanuel Iwuanyanwu, has described as false newspaper publication which credited him with comments that he regretted voting for Owerri man...

innonews - August 31, 2022 0
In the light of the deadly blow which poverty has been dealing on Nigerians of all ages, one would not but commend...