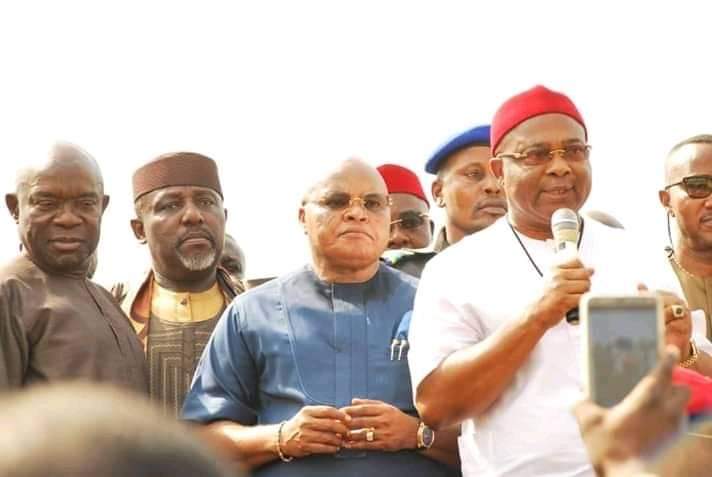 Governor Hope Uzodinma is unknowingly walking on bumpy political routes, as he consolidates his reign as Imo State Governor.

Uzodinma became Governor of Imo State on the verdict of the Supreme Court, which sacked Emeka Ihedioha of the Peoples Democratic Party, PDP.

On the political stage, the Governor seems to have ignored history by going  solo, dumping his perceived allies, who joined his victory train, when the Supreme Court rail roaded him into power on January 14, 2020.

Okorocha’s fight with Uzodinma dates back to the fierce scramble for the governorship ticket of the All Progressive Congress, APC in Imo State.

Okorocha, then Governor of Imo State, wanted the ticket for his son in law, Uche Nwosu, a plan strongly resisted by Uzodinma with aid of the national leadership of the APC led its National Chairman, Adams Oshiomole.

The emergence of Emeka Ihedioha of the PDP as Governor, became a unifying factor for the duo, until the Supreme Court slammed Ihedioha out of office which benefited Uzodinma.

Ihedioha’s exit provided a platform for “unity and reconciliation” between Okorocha and Uzodinma, since they belong to the same political family- the APC.

Events in recent days have however shown that the victory party has gone sour, as Uzodinma shut out Okorocha and his men from his government, raising worries that the dance party has ended abruptly.

Senator Ifeanyi Araraume is another benefactor of Uzodinma’s emergence as Governor. He was among those who was in Court demanding Ihedioha’s ouster. He was part of Uzodinma’s victory dance after he had rejoined the APC after his botched political sojourn in the All Progressive Grand Alliance, APGA

Araraume has suffered the same fate Okorocha has, as none of his men was considered by Governor Uzodinma for appointments.

Senator Araraume is aspiring for Okigwe Senate seat and there is no sufficient green-light to prove that he is the man that may get Uzodinma’s backing for the job.

Senator Samuel Anyanwu has also shown support to Governor Hope Uzodinma. Though of the PDP, he said the Governor who is of the APC needs the support of all to succeed irrespective of political leanings and affiliations.

The above narration underscores the fact that Governor Uzodinma is leaving out of his administration key political actors in the State, strategic political outlets within and outside the APC.

In a move aimed at decimating the opposition, the Uzodinma administration said it is auditing over N19.63 billion naria LG Funds the Ihedioha administration allegedly mismanaged-

This is clearly a move to roughshod the opposition ahead of the 2024 governorship polls, which Ihedioha looks good to emerge as its arrow head.

There is the general consensus that Uzodinma is opening up too many “enemy lines” ostensibly trying to subdue all known political layers both within and outside the APC.

Such moves had always backfired with serious political consequences.

This is the same path Okorocha followed after he became Governor in 2011.He dumped the alliance with Chief Martin Agbaso, who contributed to his ascension to power by removing his Deputy and Martin’s younger brother, Jude as Deputy Governor, on thumped up charges of fraud and corruption.

Okorocha who had gone into an alliance with Senator Ifeanyi Araraume which helped him emerge Governor for a second term, later fell out with the Isiebu born politician.

Okorocha attempted to decimate all known political layers/flashpoints he considered obstacle to make Uche Nwosu Governor all to no avail and in the end, he became vulnerable to his adversaries in the APC, and eventually crumbled to the opposition PDP which snatched victory from him and the APC.

Ihedioha understood the danger inherent in allowing the opposition to congregate against any government in power and this informed his resolve to extend a hand of friendship to opposition elements after he defeated those who had challenged his victory at the Election Petition Tribunal and the Court of Appeal.

This is a lesson for Governor Uzodinma. It is too early to open political enemy fkanks.They serve as distraction . He must consolidate by accommodating all shades of political interests within the fold of his party, now that he has settled majority of his followers who were part of his grueling battle to become Governor of Imo State.

This will give him the clear sight of who truly are his allies, adversaries and stumbling blocks to the shared prosperity mantra of his administration.

“This is a lesson for Governor Uzodinma. It is too early to open political enemy lines . They serve as distraction . He must consolidate by accommodating all shades of political interest within the fold of his party, now that he has settled majority of his followers who were part of his grueling battle to become Governor of Imo State”.