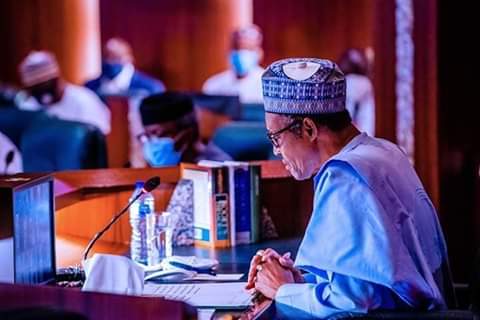 President Muhammadu Buhari and State Governors elected on the platform of the All Progressive Congress, APC now hold the ace in the party.

President Buhari had wielded the big stick on Thursday, alongside the National Executive Committee of the APC sacking the National Working Committee, NWC, led by suspended Adams Oshiomole.

Buhari said the fortunes of the APC “are currently in jeopardy”

In another tense, he said ” What we see clearly emerging, is that we are beginning to self destruct. This, my party members, is not just regrettable but utterly gut wrenching.

For the first time, Buhari became decisive on issues affecting the ruling party which signposts the fact that indeed he may have begun plans for a successor in 2023.

Dissolving the National Working Committee, NWC, has been adjudged a killer punch for Tinubu, the acclaimed national leader of the party.

Victor Giadom, factional Chairman of the party who had convened the NEC meeting Buhari and co honoured, excluded Bola Tinubu from those invited to the meeting held at the Presidential Villa, Abuja.

Tinubu has been widely reported to be interested in running for the Presidency in 2023, and had Oshiomole, as an alibi, who had tailored the party to suit the former Governor of Lagos State perceived Presidential ambition.

The composition of the caretaker committee headed by Yobe State Governor, Mai Buni, a core Buhari Ally, who had served as Secretary of the party when John Odigie Oyegun was Chairman, is a clear indication, that the APC now wears a new look controlled by pro Buhari forces. And they henceforth will determine where the pendulum swings in the party.

State Governors elected on the party’s platform, have one option- to join the “new moving train” in the APC, as those sympathetic to the suspended Oshiomole, are expected to make a u -turn, to key into new emerging dynamics in the party.

However, some of them can become victims of fierce power game on or before 2023, as those who brought in the new order in the party, will become ripe for reward for loyalty in some states.