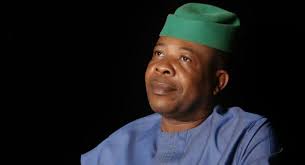 Former Governor of Imo State, Emeka Ihedioha may have begun preparing for the 2023 guber contest in earnest, INNONEWS learnt.

Ihedioha was removed as Governor of Imo State by the Supreme Court in a controversial judgement on January 14, 2020 and replaced with Senator Hope Uzodimma of the APC.

He has not made any public pronouncement since he exited from office, but has focused on making public appearances, including a heroic welcome to the State last year.

Part of the strategy for early preparation for the contest, multiple sources told INNONEWS, “is to maintain visibility in the media, in the political arena and in the minds of the people of the State, who had elected him their governor in 2019.

“And also to hold so tightly, his Rebuild Imo Team, which aided him run the affairs of government for seven months he was governor of Imo State

“One thing going for him, is sympathy from majority of Imo populace. And he knows it. If you are unbiased in your analysis, you must have observed that majority of Imolites sympathize with him on how he was forcefully removed from office by the Supreme Court.

“Sympathy from Imolites may aid his re election in 2023. This however depends on how he sustains such public sympathy before the next governorship election

Ihedioha had received enormous goodwill and accolades from friends and well wishers when he celebrated his 56th birthday last month.

There were overflow of congratulatory messages mainly in the media, which signals the fact, that despite his exit from office, a year ago, he still retains some loyalists across all segment of the Imo society.

And as part of the bonding and gluing together of his political soulmates and associates ahead of the next political dispensation, he hosted those who served in his government in various capacities at his Mbutu country home during the Easter period.

Though he carefully choose his words, not let the cat out of the bag over his next political move in his address to his ex appointees, those who attended the meeting, confided in INNONEWS, that the former Deputy Speaker of the House of Representatives, is not done yet with Imo governorship and is surely, warming up for the next contest.

“He has an unfinished business at Government House, Owerri” a source told this newspaper after the Easter bash which was a reunion of Ihedioha’s appointees, one year after leaving office.

Ihedioha is said to have put in place a small Think Tank or kitchen cabinet, comprising few of his unrepentant loyalists who are preparing the modalities for him to launch a fresh guber bid in 2023.

INNONEWS was told that the Think Tank will be expanded before the next election.

Already, the former governor maintains formidable grip of the PDP in the State -from the ward to the State levels- having reduced to rubble the grip of other power brokers in the party, such as Senator Samuel Anyanwu.

He also retains the loyalty of majority of elected public office holders in the party, from State to Federal lawmakers, including the only Senator elected on the PDP platform.

And to signal readiness for the 2023 polls, the PDP, Thursday constituted and inaugurated statutory standing committees, which according to the party’s Secretary, Ray Emeana, is part of “policy decisions to rebuild the party and consolidate it to rebuild Imo State”

innonews - January 11, 2018 0
Political leaders in Okigwe zone have opted for the Peoples Democratic Party as a vehicle to realize the zone's quest to occupy Government House,...

innonews - March 10, 2020 0
BY JANE UKONU Following the outrage that trailed the exclusion of the South East from Federal Government $22.7 Billion...

innonews - March 16, 2018 0
It was not for nothing that literary legend, William Shakespeare, had, while stressing on the import of taking the right action at the right...

innonews - January 25, 2018 0
Some stalls have been engulfed by fire at a shopping plaza located at Tetlow Road, Owerri. The fire began in the morning hours as...