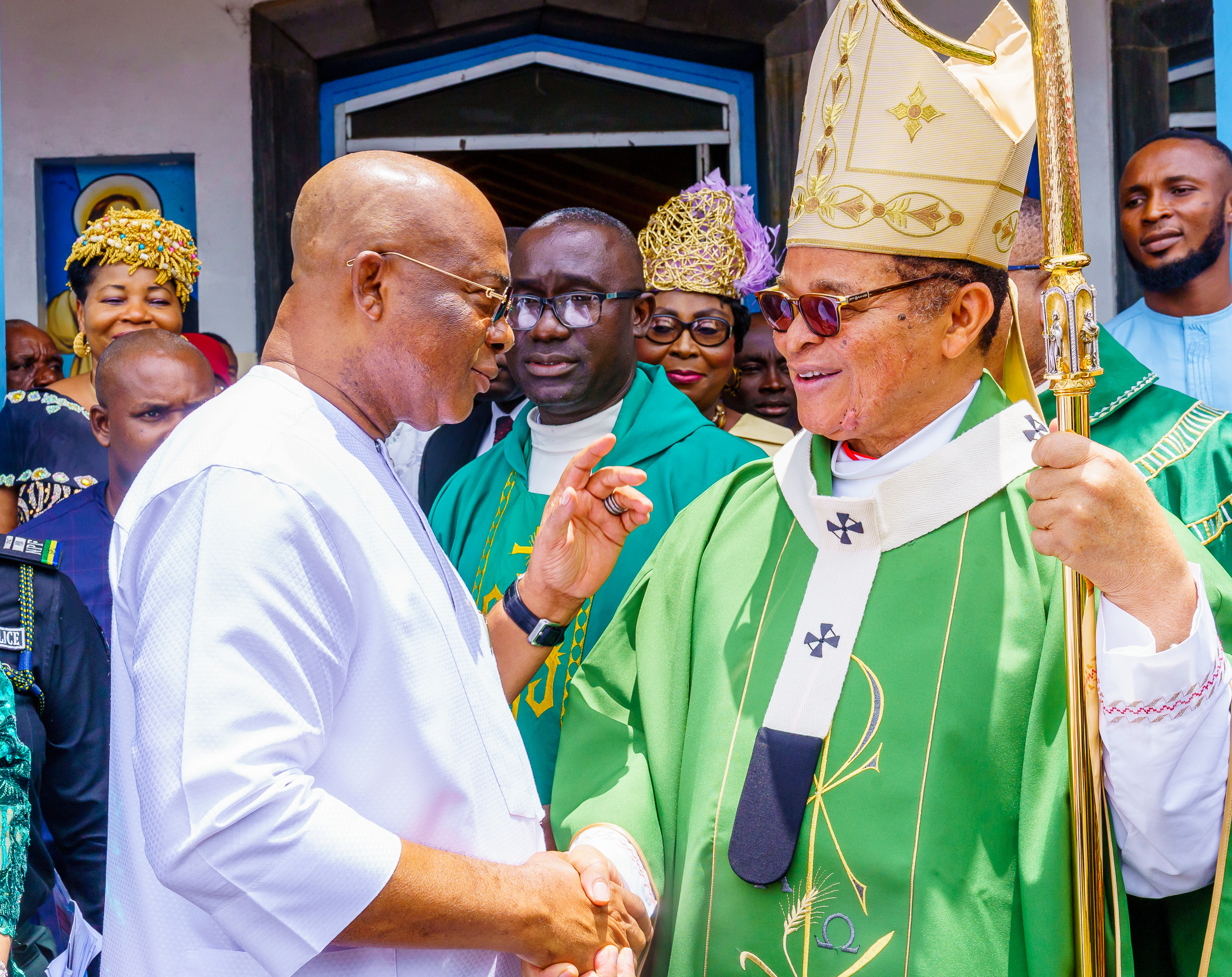 Governor Hope Uzodimma of Imo State and the Catholic Archbishop of Owerri Ecclesiastical Province, Most Rev. Dr Lucius Iwejuru Ugorji have said Nigeria still has hope despite the basket-full of challenges facing the Nation at 62.

Both spoke on Sunday at the Maria Assumpta Catholic Cathedral Owerri during a Church Service to mark the 62nd Independence Anniversary of Nigeria.

They agreed that Nigeria is endowed by God  with huge human and material resources and that with the right leadership and attitude the Country can still attain greatness.

In his remarks at the end of the Service, Governor Uzodimma challenged Nigerians to stand up to tackle the challenges retarding the progress of the Nation.

Governor Uzodimma explained that all Nations have their perculiar challenges “but we must take time to study how countries overcame such challenges and deplore proactive approaches in confronting the challenges of our time.”

“Every generation has a responsibility to confront every challenge that befell them, be it leadership or followership but the common denominator to solve a problem is by identifying the root cause of the problem.”

The Governor regretted that the attitude of Nigerians has always been to “complain and lament about problems,  identifying where things are not going well, but not doing much in planning how things can go well.”

The Governor acknowledged that at 62 Nigeria has come of age and continued to struggle for survival – failures and successes – but said “despite all the challenges that confronted the country, Nigeria and Nigerians still have life and faith in God to continue to drive the Nation.”

He assuaged the fears of the congregation that Nigeria is not making progress saying “in spite of the challenges of leadership, insecurity, poverty and unemployment the country still remains very hopeful and God has been very merciful to all of us.”

While acknowledging that the current and past leaders of Nigeria must have made their mistakes with regard to the mega problems, he however said that the strength and energy are still available to them, particularly as the blessings which God has endowed Nigeria with –  natural and human resources – provide  hope for tomorrow.

“How many of us are interested in how Nigeria can be better, and if yes what have we done in that direction?”

Drawing inference from Imo State with her peculiar problems, the Governor said:  “Leadership came, leadership left but problems are here and there. We should brace-up and confront the challenges of our time.”

He called on the congregation to join hands to solve the problems in Imo State “to allow for peace and people to go about their businesses.”

He reiterated that “the Independence  Anniversary Church Service was to thank God for the peace, unity and development of our country, Nigeria,” and reminded all that “Imo State is held back because of our past mistakes but  we cannot die with our past mistakes.”

He urged the citizens of Imo State to “begin to do things differently, listen to the Government of the day, find out if her story is good, if yes embrace it for the interest of the State and the country at large because we have no other place to go.”

“When I came as a Governor I saw poverty, broken down infrastructure and in fact,  things fell apart and the centre could not hold. The good news is that to solve the problem the 3-R government has developed an ECONOMIC GROWTH PLAN as the password to remove poverty, unemployment and to restore security.”

In his homily, Archbishop Ugorji thanked God for the numerous blessings He endowed Nigeria with as a nation “as well as so many talents and human endowments given to her leaders,” indicating that there is still hope for the country.

Ugorji recalled the expectations of Nigerians 62 years ago and said they desired a nation devoid of rancour, ritual killings, insecurity, poverty, and all forms of immoralities.  Also, he said that Nigerians deserve a nation where everybody will be respected, given equal opportunity, justice and fair play and experience a life of freedom.

He added that the citizens are desirous of benefiting from God-given natural resources, in a state of peace and obedient to rule of law.

The Archbishop acknowledged that the Independence Anniversary Mass was not just to mark the 62nd Independence of Nigeria, but an event intended to remember our forefathers, brothers and sisters who paid the supreme price to make us a nation. “We look forward to celebrating a peaceful country, where peace and unity will dominate the entire nation and the citizens will be happy for it.”

He reiterated that “Nigeria is a potential great country with numerous natural resources but leadership and management of these resources is making the citizens to suffer.”

He called for “change of heart from all sectors and leaders to embrace God and shun needless killings, move away from corruption, fraud, kidnapping, selfishness, embrace security of lives and property and go back to God in prayers.”

The Mass was attended by Wife of the Governor, Barr. Chioma Uzodimma; top government functionaries like the Deputy Governor, Prof Placid Njoku; Speaker of Imo State House of Assembly, Rt. Hon. Emeka Nduka (leading his principal officers and other members); Secretary to Government of Imo State, Chief Cosmas Iwu; Chief of Staff to the Governor, Barr  Nnamdi Anyaehie; Commissioners, other government appointees and heads of government agencies and parastatals.

Also in attendance were the leadership of the All Progressives Congress in the South East and Imo State, Sole Administrators and Coordinators of Development Centres, representatives of security agencies in Imo State, traditional rulers and many others.

innonews - March 29, 2018 0
Senator representing Owerri Zone in the Senate, Senator Samuel Anyanwu has said he desires a free, fair and credible governorship primary that will produce...