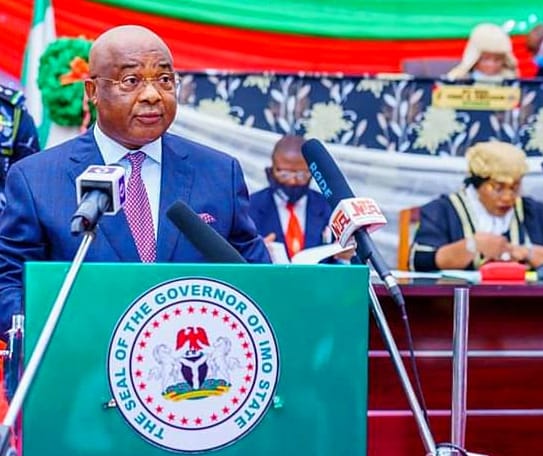 Editors in Nigeria on Saturday night rounded off their four-day conference in Owerri, the Imo State capital, with a verdict that Governor Hope Uzodimma has performed creditably barely three years in office.

The Nigerian Guild of Editors had chosen Imo State as host of the 18th All Nigeria Editors Conference (ANEC) where the theme: 2023: Political Landscape,  Credible Election and the Role of Editors, was discussed.

The event was also an opportunity for the Editors to go round the host State to assess the projects carried out by the government of the day as well as induct deserving journalists and senior Editors into the elite body as members of the Guild and as Fellows of the Guild.

At a Gala Nite held at the Banquet Hall of the Imo State Government as part of the closing session of the 18th ANEC, not one member of the elite media group had something different to say about the developmental strides of Governor Uzodimma.

They were in agreement that Governor Uzodimma’s administration had aquitted itself in infrastructure renewal, particularly on road infrastructure, and should be supported by well meaning people to continue on the trajectory of working to change the governance narrative of Imo State.

From the assessment of President of the Guild, Mustapha Isah to Dupe Gbadebo to Imani Amarere, (all Fellows of the Guild) among other Editors and Fellows of the Association, Governor Uzodimma is quietly changing the hitherto infrastructural deficit associated with Imo State.

Apart from the signature Owerri-Orlu, Owerri-Okigwe roads, the numerous newly reconstructed roads within the Owerri capital territory, the ongoing construction work on so many other inland roads, the Editors could also not hide their excitement over the completely rebuilt Imo State House of Assembly Complex. During their visit to the Complex, they moved a motion at the Chambers scoring Governor Uzodimma’s government as above average.

They however proferred suggestions to government on areas of improvement in the interest of the people.

Besides, the Editors lauded Governor Uzodimma for his efforts in containing what seemed to be intractable security challenge, noting that from what they have seen the situation is not as critical today as it was painted before now.

The Editors also thanked the Governor for taking time to avail them of his journey to Imo State government house so far, indicating that they are now properly guided on what the political situation in the State presents.

In his closing remarks at the Gala Nite, Governor Uzodimma advised the Editors to always verify and do thorough investigation before going public.

The Governor said that he was not oblivious of the fact that the pen is mighter than the sword, but appealled that before they use the pen on him and any other person practitioners should make extra effort to verify the source of their story before going to the press.

The Governor thanked the editors for the honour done him by chosing Imo State for the Conference as well as for the positive testimonies they gave on their return from projects tour of the State.

He said that democracy remains the best form of government, but added that “democracy cannot thrive without the media.”

Governor  Uzodimma said he wonders why after 20 years of uninterrupted democracy in Nigeria, the media still find it expedient to describe our democracy as nacent.

He said there was the urgent need to interrogate issues properly and find out why our reasoning as Nigerians in most cases has been misapplied.

Governor  Uzodimma said that in other climes the media always partner with government for the good of the people, and in such partnership there’s reciprocity, and challenged the Editors to think about prioritizing national interest in the course of their duty.

The Governor regretted  that the work environment of the media in Nigeria poses its own challenges  to effective practice, noting that most hit are those working for private media houses who, more often than not, are compelled to act against their wish.

Regardless of the harsh conditions under which most journalists work in Nigeria, he pleaded with them to take courage “as it may not be rossy but there is Hope and light at the end  of the tunnel.”

To the Editors, the Governor called on them to take more time to “collaborate with those in authority to think of how to correct the ills in the society.”

His words: “It is not enough to blame the man on the seat of power rather, all should come together and interrogate the issues that are holding back the progress, peace and development of the Nation.”

The Governor advised the Editors to always see him as a willing and ready partner, informing them that based on his family back ground, he is “one of the best and brightest.”

Earlier, the President of Nigeria Guild of Editors, Mr Mustapha Isah, had thanked the Governor for accepting to host the Conference and providing them with “the overall enabling environment” they required to succeed.

The highpoint of the Gala Nite was the induction of new members into the Guild and older members as Fellows of body.

Isah thereafter presented an award to Governor Uzodimma for excellent host of the 18th ANEC in Imo State.

The dinner was attended by the wife of the Governor,  Barr Mrs. Chioma Uzodimma, the Deputy Governor, Prof Placid Njoku, the Speaker Imo State House of Assembly, Rt. Hon Anthony Emeka Nduka, members of the State Exco and other invited guests.

innonews - October 30, 2020 0
The Obor community of Imo State of Nigeria has set the pace in streamlining customary land laws in line with emerging global...

innonews - March 30, 2022 0
After the successful conclusion of it's National Convention, there are strong indications that President Muhammadu Buhari and the top eggheads of the...

innonews - April 9, 2019 0
There were no casualties in the fire incident that took place at the Sam Mbakwe International Cargo Airport,...

innonews - December 11, 2017 0
If reports reaching this online news platform is anything to go by, only "loyal" House of Assembly members will attend the expected budget presentation...