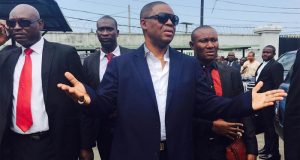 Kayode in a tweet on his tweeter handle Friday used a degoratory statement on the Imo State governor describing him as a “ diaper wearing creature” for insisting that the President is not on a life support.

He said the Imo Governor failed to understand that Nigerians have the right to know the truth about the health status of Mr. President.

The former Minister, who took to his twitter handle wrote: “When a courageous @GovAyoFayose tells u @MBuhari is in a coma and diaper-wearing @GovernorRochas tells u it is a lie u know who to believe.