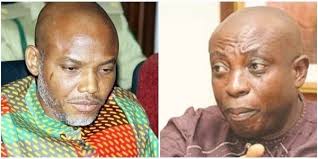 The Movement for the Actualization of the Sovereign State of Biafra (MASSOB) has begun consultations with some groups in the North.

Leader of the group, Ralph Uwazuruike has appealed for peace just as he opened talks with some groups in the North over the quit notice issued to Igbos in the Northern region by Arewa Youths.

The News Agency of Nigeria (NAN) said Uwazuruike led a delegation of some Igbo leaders to Kaduna.

He said MASSOB has been in existence for 18 years without violence, claiming that in 2009 he went to London and opened Radio Biafra and handed it over to Nnamdi Kanu as the Director. He said afterwards, politicians hijacked Kanu and “ he started working for them”

Uwazuruike said the radio that was meant to educate the people and advise them was turned into a source of hate messages, blackmail and intimidation. He said the resultant effect was the Northern Youths who came up “to challenge us, to say that they are not happy with the hate messages and the insults they receive from the same radio”

The MASSOB leader said he assured the late Odumegwu Ojukwu when he was alive that there would be no other Civil War in Nigeria.

The Convener of the meeting,  Hamza Al Mustapha, a  former Chief Security Officer to Late Head of State, General Sani Abacha, said it was based on the quit notice issued to Igbos residing in the North by some Northern groups.

He said the meeting was to intervene in the impasse threatening the unity and oneness of the country, urging the youths to wear their thinking caps, use their brains and refuse to be used in causing any form of crisis in the country.

innonews - April 14, 2018 0
In response to rising bank robbery around the federation, Imo State Commissioner Of Police, Chris Ezike has said as a counter measure he has...

innonews - May 24, 2018 0
Governor Rochas Okorocha took one more step to actualize the governorship ambition of his son in law and Chief Of Staff, Uche Nwosu when...