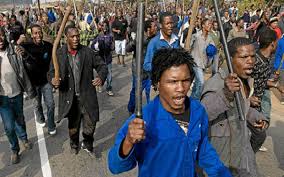 The Nigerian Union in South Africa has claimed that two communities in the former apartheid country had asked them to leave their territories.

Ikechukwu Anyene, President of the Union, said the Kuruman community in Northern Cape Province had given Nigerians then order till Thursday to quit.

Anyene also revealed that the Klaafontein community, Extension 5, Johannesburg had instructed landlords not to allow Nigerians in the area to renew their rent.

He said the South Africans blame Nigerians for the rise of illicit drug trade and prostitution.
.

“The Nigeria union held series of meetings with the affected communities as well as police and local authorities on the recent threats to Nigerians.

“We have also written reports on these incidents and sent to the Nigerian Mission and the South African police.
“We recommended interventions before the June 16 deadline to the mission and we are waiting for their response” he said.

Okorocha’s Govt: From Action To Commitment

innonews - November 12, 2017 0
BY: ONYENWE PRINCELY# Action they say, speaks louder than voice” And in this context, it behooves on the people of Imo state to evaluate what...

innonews - May 11, 2018 0
It was an exciting moment in Nkwerre LGA of Imo State on Wednesday when an APGA front line governorship aspirant, Mr. Okey Ezeh, visited...

innonews - June 27, 2019 0
BY: GEORGE UCHIME, OWERRI Missing billions, State owned properties alleged to have beem looted by officials of the past...