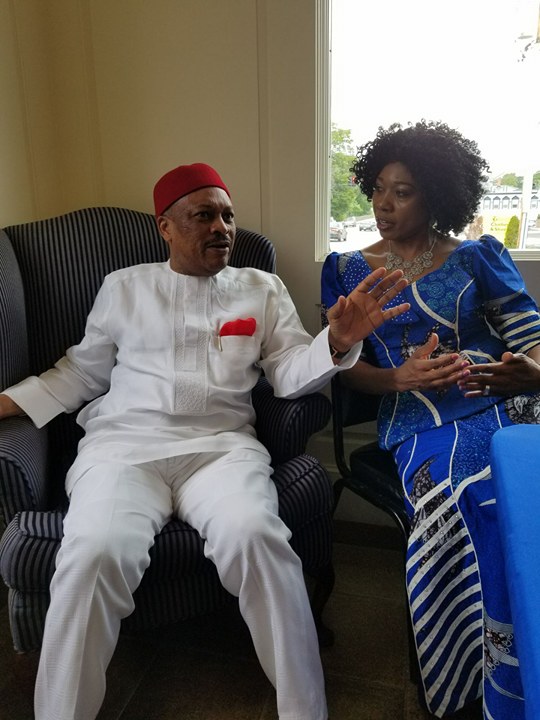 The senator representing Owerri senatorial zone in the National Assembly Senator Samuel Anyanwu (Sam Daddy) has thrown his weight behind the the David Omenukor Foundation crusade against colorectal cancer in the society.

Senator Anyanwu made the pledge in Boston Massachusetts while the Chief Executive and Founder of the Foundation Keyna Omenukor was briefing him on the activities of the foundation. The event was the 10th annual convention of Mbaise USA holding in Boston where the Senator during his address commended entire Mbaise Nation for their vision, hard work and team spirit.

He noted that as the grandson of Mbaise he is proud to be associated with one of the most industrious people in the world. He assured the people of Mbaise that as their senator in the National Assembly, he will ensure he work closely with another of Mbaise son in the House of Representative, Hon Nnanna Igbokwe to attract federal projects to Mbaise land.

The Distinguished Senator assured the people that by Christmas, most of the projects he has attracted to Imo State and Mbaise would have been completed. The Senator noted that he has been working together with great sons and daughters of Mbaise stating that the Director General of his campaign, Chief Christogonus Ugochukwu Okoro, Agbara Ahuru Gbuo Okuko of Igboland believed in him hence he cannot disappoint him or Mbaise Nation his maternal home.

Sen Anyanwu asked for the continued support and prayers of all Mbaise people. The Senator also identified with the good works Omenukor Foundation in a special way. While taking a tour of Omenukor Foundation Stand at the Mbaise Concention, Mrs Omenukor informed the senator that the foundation provides free screening for cancer and other chronic diseases like Diabetes, Malaria and Hypertension and treats other diseases conditions.

The foundation also organizes awareness campaigns to sensitize people on the dangers of not getting screened early as well as educate them on how to eat healthy. She disclosed that the foundation has organized ten health outreaches since 2015, eight in Imo State and two in the USA. Senator Anyanwu who was obviously impressed by the activities of the Foundation and its outreaches so far pledged to support the organization.

Thanking the Senator who was a special guest of honour at the event, the President of Mbaise USA , Sir Law Osondu thanked him for honouring their invitation. He assured him of the support of Mbaise people noting that more projects and programmes aimed at uplifting lives in Mbaise and Owerri zone are still being expected from him asking the Senator to work in synergy with Mbaise Nation. SOS Echendu the Vice President , Mbaise USA, Chief Wilson Iwu, Chairman, Mbaise USA Board of Delegates and his Vice Ezeji Alozie Aguwa in their seperate comments expressed confidence that the understanding between Mbaise people will always support those who have positive programmes that will benefit thepeople of Mbaise and Nigerians.

Mbaise USA Convention is an annual event of all Mbaise sons and daughters living in USA coming together to chat a way forward for the development of Mbaise land. This years event futured, Mbaise Leadership Forum, Youth Programme on Culture Ntozu Oke,Town Hall meeting, Gala night and fund raising.

innonews - July 14, 2017 0
ANALYSIS OF A DEADLY COLD WAR STILL ONGOING IN IMO PDP, WRITES POLITICAL EDITOR, CHIEDU UZODINMA#   Despite the Supreme Court judgement that has given the...

innonews - March 16, 2020 0
Arsenal mid- fielder, Lucas Torreira, says Manager Mikel Arteta is “better” and has been communicating with players Arteta was forced into...

innonews - October 21, 2018 0
*As Tension Grip Okorocha, Hope Uzodinma Camps* BY RALPH EJIMKONYE There are ticking time bombs in both the Peoples Democratic Party and All Progressive Congress, APC...