Home Viewpoint Fani Kayode, Okorocha And The Day Of Judgement 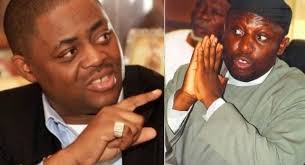 In the Grail Message, one of the three basic laws is that of Reciprocal Action. The Eckankar’s version is the Law of Karma. In the Christian Bible, Luke wrote that whatsoever a man sows, that he shall reap. This principle is also found in the writings of Gautama Budha, in Krishna’s Bahagavad Gita and in the Damapada. The reciprocal effect of a harm to an innocent, says the Koran, is so big that it is assumed to have been done to the whole mankind. So, in all religious books, we have it on the authority of God that a concomitant punishment awaits every evil deed both here and hereafter.

In the past six years, Imo has only been governed on the lips of Okorocha. Media governance, falsehood and propaganda have replaced the overriding necessity to meet basic needs. In Imo State, three out of every ten women in the labour room have slim chances of coming out alive; there are, by the latest count, over nine hundred thousand unemployed youths residing there; nearly all glorious industries, private and public, have collapsed; violent crimes have enveloped the state, people being shot dead anyhow in the streets of Owerri, banks now close by 1pm in places like Orlu; and the lands yield no more: there is no agricultural policy in place. The Imo that Okorocha took over from Ohakim ranked first in WAEC. But today, the state has taken a back seat. There are only two surgeons on the payroll of the government, no pathologist, no psychiatrist. Accident victims die every hour in the only teaching hospital in the state located in Orlu because the only oxygen machine there no longer functions. Imo is needlessly perishing. The situation in Imo State is totally unacceptable.

In the face of all these, Okorocha keeps talking and bragging. He talks and lies and fools himself everyday, everywhere. Today, he has met a better talker in Femi Fani-Kayode, and now he has become cold, like a coward, he now begs for silence and peace.

innonews - May 21, 2018 0
The Catholic Church has suspended its planned mass rally earlier scheduled to hold in Owerri, Imo State capital on Tuesday, 21st May, 2018. A...

innonews - August 15, 2020 0
Concerned Indigenes of Umuezuo Community, in Ahiazu Mbaise LGA, have called on other members of the community, to join hands with it...