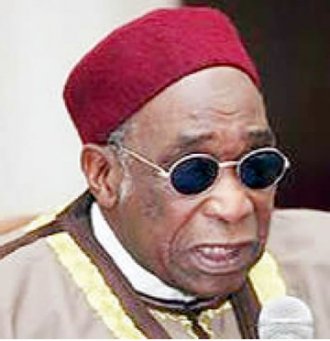 An associate to the elder statesman and Dan Masanin Kano, Sani Darma revealed on Monday that Sule died in Cairo, Egypt Sunday night.

A report quoted Darma saying that Sule took ill  last weekend and was flown out to Egypt Saturday. Unfortunately, according to the report, Sule gave up the ghost.

According to a statement by the Kano State Commissioner  of Information,  Malam Muhammad Garba, the State Governor, Abdullahi Ganuje said the work free day is to mourn the late elder statesman.

The Commissioner said funeral prayer  for the deceased will be conducted on Tuesday at the Emir’s palace, Kofar kudu by 4pm.

He said he received the news of the death of elder statesman with rude shock and heightened disbelief.

“The sad news of the death of an outstanding statesman, Alhaji Maitama Sule has been received by the governor, Owelle Rochas Okorocha with rude shock and heightened disbelief.

“The governor said, with the demise of Alhaji Sule, the nation and indeed, Africa have lost one of the finest and vocal nationalists who had lived his life preaching peace and unity of purpose for the nation.

“He said, as a federal minister and Nigerian Ambassador to the United Nation respectively and even as the then leader of the Northern Elders Forum, the Dan Masanin Kano displayed exemplary leadership and commitment to service for the good of all.

“The governor regretted that Alhaji Maitama Sule has died at a period when the nation needs detribalized leaders like him to be around and added that the nation won’t forget the enviable contributions of Alhaji Sule to the development and growth of the nation in a hurry.

“According to the governor, in many years to come history and posterity will be fair to Alhaji Sule because he acted well his part both as a leader and as an elder statesman and since honour lies in one acting well his part.

“He extended his condolences to the governor, government and good people of Kano state over the death of this great Nigerian.  And prayed that the Almighty God would grant those he left behind to mourn him all they need to bear with this great loss.