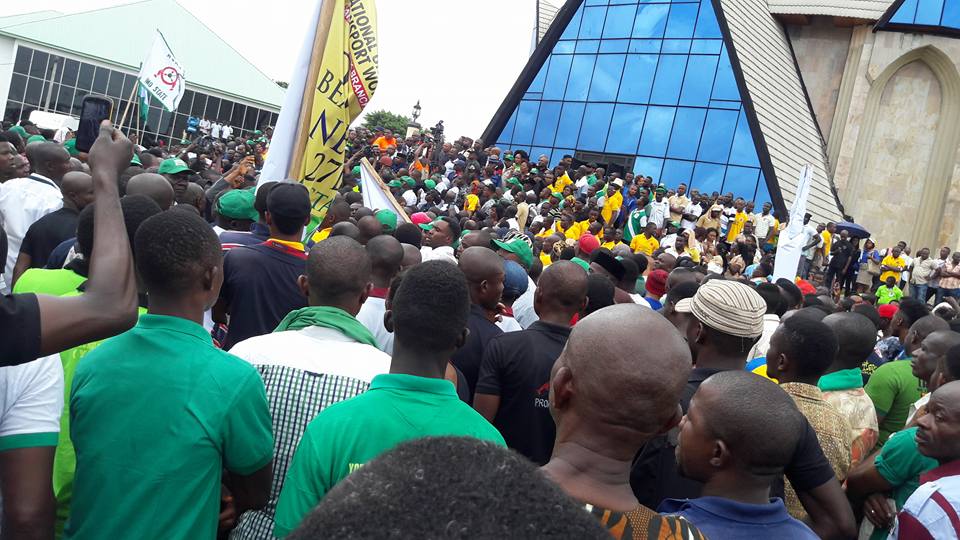 Analysts argue that  the “three million man march” was a political stunt, a game- plan to send far reaching message to Okorocha’s political opponents that he is firmly in control of both the voting and non- voting population in Imo State, writes JOHN IBE

Last week, a three million man march was held in Owerri. It was an event co-ordinated by Jeff Nwoha, the man who heads Imo State Environmental Agency, ENTRACO. According to him, the purpose of the rally was to show solidarity to his boss, Governor Rochas Okorocha, for his giant development strides in Imo State and to commend President Muhammadu Buhari for his anti corruption crusade.

The protest was an offshoot of a counter protest earlier planned by a group led by a former Speaker of Imo State House of Assembly, Kelechi Nwagwu. He had planned a One million March in Owerri but had to call it off when the state government said it will come up with a three million march same day- July 3.

According to the former speaker, he had to suspend the anti government rally to avoid breakdown of law and order in the State. He feared that his rally would be hijacked by urchins and hoodlums because the state government had scheduled the three million man march on the same day.

Nwagwu suspected a booby trap somewhere. He felt that his rally would be hijacked and he would be held responsible for causing the breakdown of law and order in the state capital.

The pro government rally later took place a various designated locations in Owerri. It was more than a rally of support. Its scope and size  showed that the organizers wanted to use it to inflict psychological terror on political opponents of the governor.

There is the belief that the rally was a showpiece staged by Okorocha’s men to sell the dummy to the governor’s political foes that Imo people are with him and are ready to oppose any change in his plans to give the state a worthy successor in 2019.  Okorocha understood the political gains of his pro rally when he told the Marchers that he will give the “Holy spirit” to the people of Imo State as his successor.

He said “I have heard your request for a proactive successor, before I leave I will send you the holy spirit, I will never leave you alone, you can imagine if previous government for the past 30 years have been working the way I am working now, by now Imo State would have been London. The massive infrastructure in the State is only within Six years, so think of 30 years”

Analysts argue that the “three million man march” was a political stunt, a game- plan to send far reaching message to Okorocha’s political opponents that he is firmly in control of both the voting and non- voting population in Imo State.

However, this is a sharp contrast to prevailing political and economic situation in the state where majority of the populace lament of biting hunger and groaning hardship.  Imo State has been fingered as one of the many states in the federation pensioners and workers salaries are seldom paid. Countless protests had been embarked on by aged pensioners who lament over non- payment of pensions while the governor’s family members relish in prosperity.

A proposal by the state government to the pensioners to sign a document slashing their pensions by 60% was overruled by the National Industrial Court in Owerri.  Analysts therefore wonder how such a staged managed and financially induced rally should be used by a government that claims to be in touch with the masses to assess its political strength and performance index in the state in the last six years.

There is a general consensus that the protest was monetary induced as there were allegations that N1, 000 was paid to each participant that took part in the rally. In a state majority of the youths are not employed, the possibility of jobless youths taking part in a rally just for a fee is really attractive.

The Governor’s statement on “giving the people of Imo State the Holy Spirit” in 2019 put a blur on the entire exercise. It was a an over- statement as the governor was said to have equated himself with God by making such pronouncement. An Owerri based journalist, Collins Ughalla in an article described the statement as blasphemy.

This puts a question mark on the success or futility of the rally- if it really reflected the genuine mindset of the people of Imo State who are yet to comprehend what has befallen them in the last six years.

innonews - October 5, 2017 0
Ohaneze NdiIgbo has advised Igbos to forget Biafra and rather push for restructuring. President General of the pan Igbo group, John Nwodo stated this while...

innonews - December 8, 2018 0
*BY RALP EJIMKONYE* Flags of the All Progressive Congress are now flying low in Imo State.

innonews - December 5, 2017 0
Lionel Messi’s statue in Argentina has been hacked down by irate Argentines in Buenos Aires for the second time. The FC Barcelona forward bronze sculpture...