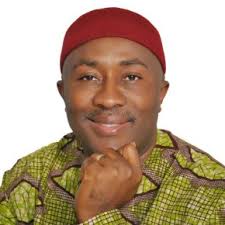 A former Member of the House of Representatives , Hon. Uche Onyeagocha has been appointed member of the APC Campaign Council for Osun West Senatorial Bye election.

Onyeagocha is from Imo State and is one of the “ Abuja based politicians” in Imo APC, a group of politicians whom Governor Rochas Okorocha had accused of giving him headache.

This website was informed that the committee will be inaugurated on Wednesday 28th June 2017 at the National Secretariat of the party.

Onyeagocha had in May resigned his appointment as member of Special Development Council in Imo State. He accused Governor Okorocha of hatching plans to install his Chief of Staff and Son- in law, Uche Nwosu as his successor in 2019.

Some leaders of the APC from Onyeagocha’s Owerri West later visited the Governor where they “ disowned” him, a move the former Reps Member alleged were influenced by agents of the Governor who used monetary inducement on the so called APC leaders to carry out the assignment.

Onyeagocha had drummed support for Owerri zone to produce the next Governor of Imo State in 2019.

His appointment further raise questions on the leaning and alignment of the APC National Leadership in Imo State chapter of the party. Analysts speculate that the party in Abuja  may be tilted towards the “Abuja Group” than the Okorocha set up.