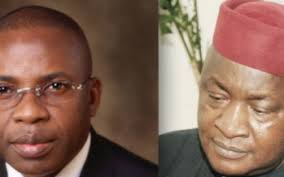 Two former governors of Imo State, Achike Udenwa and Ikedi Ohakim, were conapiciously absent at the grand finale of the 55th birthay ceremony of the State governor, Rochas Okorocha. The duo were to receive awards along with other high profile Nigerian and foreigners.

However, the event was however witnessed by Ghanaian President, Nana Akufo Addo, dignitaries from other African countries such as Congo, Senegal and Liberia.There were also representatives from Slovakia.

innonews - September 27, 2019 0
Imo State indigenes who were part of the returnees from South Africa were hosted by the Catholic Archbishop of Owerri, His Grace, Archbishop...