Home Politics If APC Had Won, By Chinedu Agu 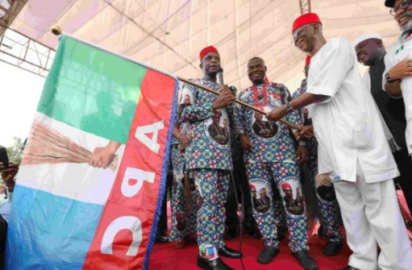 If APC had won, the traditional institutions in Anambra State would have been turned into a laughing stock. More so, Obi of Onitsha, that fine Gentleman, would be dethroned by the Government of the day and replaced with a Bootlicking Traditional Ruler. Eze Alfred Achebe would go to Court and obtain a judgment for his reinstatement, but they would disregard, scorn and despise it. Ask any Imolite.

If APC had won, all the houses and structures lying beside the already solidly asphalted Ekwulobia Ezinifite road, Ndiokwu-Amikpa-Oki Umuchi road, Nsogwu Umunze road, Oye Neni-Adazi Nnukwu-Akwaeze-Igboukwu road, Agulu Nwanchi-Obeledu-Neni road by Obiano Administration would be demolished for the sake of needless expansion. And after the expansion, that part of the road would delapidate in 3months. Ask any Imolite.

If APC had won, those roads mentioned above would be momentarily motorable at yuletide and will be washed away with the first heavy rain of the rainy season. Ask any Imolite.

If APC had constructed those 3 Flyovers in Awka, it would not have been that solid. It would have been done with Blocks. The Aroma Bridge, the Bridges in Amawbia and Kwata, the two Bridges and 5-Cell Culvert in Awgbu-Ndiukwuenu-Awa-Ufuma axis would have been constructed with Headpans and Barrows by unskilled Labourers. Ask any Imolite.

If APC had won, first two months of resumption of duty would be Operation Demolish Markets. Onitsha Main Market, Ogidi Building Material Market, International Electronics Market Onitsha and Nkwo Nnewi Market would be demolished. And hunger and penury will be unleashed on Anambrarians. Ask any Imolite.

If APC had been there in the last four years, the Agricultural revolution which the government launched in Nteje, Oyi Local Government Area, the $150m which the government attracted from Coscharis Farm Project in Anaku and the $50m the government attracted from the Songhai/Delfarms integrated Organic Farm Project in Igbariam which has made the State an Exporter of Farm Produce in Europe would have been replaced with “ikuola nkwu” slogan. The State wouldnt have been flooding the Markets with Anambra Rice which is competing favourably with other brands in the markets. Ask any Imolite.

If APC had won, these monumental agricultural activities going on in Igbariam and Anaku will cease in less than 6months of assumption of power. Ask any Imolite.

If APC had won, Pensioners in Anambra State who had enjoyed prompt payment of their deserved Pension would receive dud Cheques subsequently. Ask any Imolite.

If APC had won, Civil Servants in Anambra state who have as well enjoyed prompt payment of salaries would have these wages impiously slashed and paid in bits and pieces after it had been in arrears for nothing less than 6months. And there may not be any promotion for Civil Servants for another 4years. Ask any Imolite.

If APC had won, Anambra State would host African Presidents and honour them with Life-size Statues in Awka while Achebe, Ojukwu and Osadebe watch from the celestial sidelines in silent envy. Ask any Imolite.

In addition to that, popular roads in Awka like Works Road, Dike Street which runs into Zik Avenue, Obunagu Road, Dr. S.M Okeke Avenue, Nwibor Street, Ken Okoli Street, Chukwuogor Street etc, will all change their age-long identities and take that of An African Leader whose Leadership has never been of any benefit to any Anambrarian. Ask any Imolite.

If APC had been in charge these past four years, over 500 Anambra Youths wouldnt have been effectively trained in diverse skills and crafts at the Technology Incubation Centre in Nnewi. Over 500 Anambra Youths would not have been trained at the Agricultural Training Institute in Mgbakwu. Rather, the Government would have abruptly disrupted the Programme, conducted an Inquest into the propriety of the process and after 3 years and more come up with a Youth Must Work Initiative where Anambra Youths will be distracted with 20,000 monthly stipend which shall last just for 7months or a little less. After then, they roam the streets of Awka helplessly. Ask any Imolite.

If APC were there in the last 4years, Anambra State would not have maintained an enviable position in both NECO and WAEC examinations as a result of qualitative education. Rather, education would have been dragged into the mud in the name of Free Education. Faculties of Medicine and Law et al in Anambra State Univerity would have lost accreditation, the Teaching Hospital would have grounded to a halt because of lack of subvention. Ask any Imolite.

Education in Anambra State which was pursued in tripod dimensions of infrastural development, pupils/students development and Teachers’ welfare would have received a planless approach where you starve a Lactating Mother and expect the Baby to grow rapidly. Ask any Imolite.

If APC had won, Nwoye’s 44th Birthday on September 13 of next year would have been lavishly and prodigally celebrated with 21 human-size cakes while the impoverished Pensioners and Civil Servants are made to watch smacking their lips. Ask any Imolite.

If APC had won, by this time next year, the Government would approve 850m Naira to the Sister of the Governor for christmass decoration. Then those roads constructed shortly before the rainy season would receive a hurried make-over to enchant the view of Anambrarians who would come home at yuletide. Ask any Imolite.

If Anambrarians did not have a feel of God’s manifold miracle of November 18, Imolites got a vicarious thrill of it.

On sunday morning, we looked up to the Mountains where our help shall come from and prayed to the God of “Ndi Anambra” for ours in 2019.

‘An Igbo Accepted Outside Igboland Will Be President In 2023’

innonews - August 8, 2020 0
The South East Coalition For Good Governance, SECG, has said for an Igbo to emerge President of Nigeria in 2023, the zone...

‘God Did Not Come From Heaven To Make You Speaker, Araraume...

innonews - September 29, 2021 0
BY ADANNA ONWUKWE The Federal Medical Centre, Owerri, has said it would conduct mass burial for unidentified corpses in...