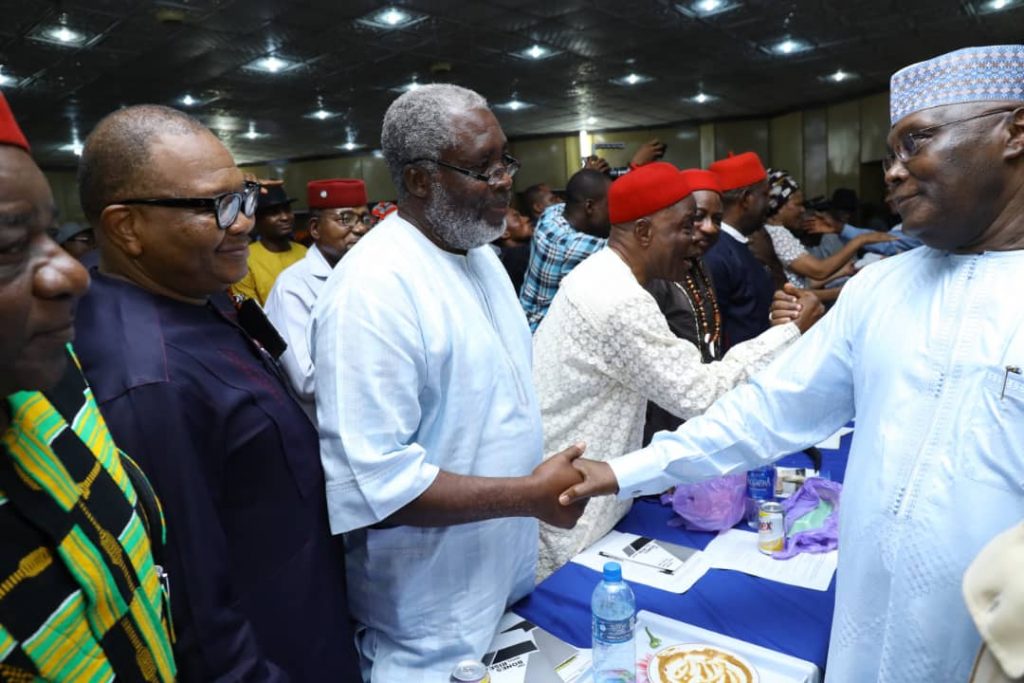 Months ahead of the 2019 presidential election in Nigeria, Ndigbo on Wednesday in Enugu tabled a list of demands to the candidate of the Peoples Democratic Party (PDP), Alhaji Atiku Abubakar.

Top on the list presented by President General of Ohanaeze Ndigbo, Chief John Nnia Nwodo, is a firm commitment on the issue of restructuring of the country.

Also on the list are an end to marginalisation in infrastructural development, revival of the coal industry and equity in political appointments, including in the security services.

The demands were extracted from the communiqué of a meeting held earlier in the day by Igbo leaders to chart the political future of the race.

Responding during the meeting held at the Conference Hall of Nike Lake Resort, Atiku said: “As far as restructuring is concerned, it is a settled issue. I cannot go back on what I have been preaching for years.”

He assured Ndigbo of equity in appointments and infrastructural development, saying specifically about the coal industry: “If I am in charge, power from coal will be used to power the South-East and South-South. Your coal industry will come back to life.”

He charged Ndigbo “to come out in millions to vote for the ticket you believe will restructure Nigeria and that is the Atiku Obi ticket.”

Almost every living Igbo leader attended the event, the first phase of which was chaired by iconic constitutional lawyer and elder statesman, Prof. Ben Nwabueze, before the arrival of Atiku and his delegation.

innonews - March 11, 2022 0
A former principal investigator of the study of the brain in the space programme of the United States National Aeronautic and Space...

Groups Back Okereke For Reps Seat

innonews - November 27, 2020 0
BY RALPH EJIMKONYE The simmering political battle between Governor Hope Uzodinma and his predecessor, Senator Rochas Okorocha, may have...

Sarri To Victor Moses: You Can Go

innonews - November 2, 2018 0
Chelsea Manager, Mauricio Sarri has told former Nigerian international, Victor Moses that he is not in his plans and therefore should be ready to...