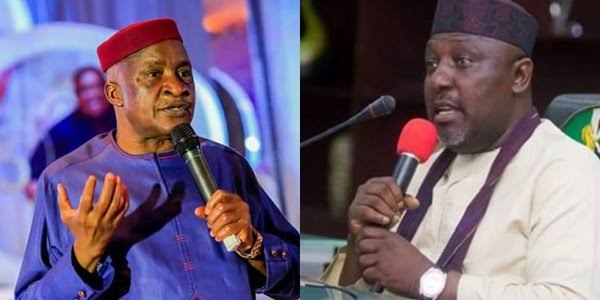 Lack of consensus approach, ignoring the input of stakeholders and solo run in choice of a successor by State Governors in Imo State, past and present, have been given as key reasons why former Governor Achike Udenwa and outgoing Governor Rochas Okorocha of Imo State failed to produce successors after their tenure in office.

Former Governor Ikedi Ohakim failed to win re – election in 2007.

A political analyst, Mr. Chiedu Uzodinma who spoke to this newspaper in Owerri said Udenwa and Okorocha made wrong choices thus encountered stiff opposition from the political elites who were not consulted and excluded from their succession plans.

He stated “One common feature in Udenwa and Okorocha’s inabilities to have successors was lack of consensus approach in selecting those who would taken over from them. Most of the would be successors were either handpicked without inputs from key and crucial stakeholders of the Imo polity.

“In a state as advanced politically like Imo, no Governor can ignore the elites, stakeholders who remain the heartbeat of the Imo polity in selecting a successor. Udenwa and Okorocha are guilty of this error

Mr. Uzodinma pointed out that the achievements of the Governors were not enough for them to rail road their successors into office.

He continued “A careful observation and study has revealed that the achievements in office of the duo played little or no part in ensuring the success of their succession plan. Okorocha used his achievements in office as a basis to drive his choice successor to office but that plan crumbled because it was overwhelmed by many factors.

“Achike Udenwa was in office for eight years and his achievements can be described as average.  What rather conspired against Udenwa’s succession plan were political dynamics prevalent in the State at that time and opposition from the political elites. Strong political factors mixed with interplay of several variables also affected his succession game- plan. Such variables include the battle for the soul of the then ruling People’s Democratic Party, which consumed whatever game- plan he had.

He stated Okorocha faced similar fate with Udenwa as he was wrestled by opposition forces in his political party, the All Progressive Congress, APC over his choice of Uche Nwosu.

He explained that while Udenwa faced opposition from members of his political party, the PDP, the same fate befell Okorocha who was also tackled by opposition forces in the All Progressive Congress, APC who formed the Imo APC Coalition.

Mr. Uzodinma said “The emergence of some powerful politicians encapsulated in the Abuja group in Imo PDP at that time gave Udenwa’s succession plan the biggest threat. The group made up of Chief Emmanuel Iwuanyanwu, Senator Ifeanyi Araraume, Dr. (Mrs) Kema Chikwe, Tony Ezenna, Festus Odumegwu, and other political heavyweights dismembered Udenwa’s political machine in the scramble on who takes over from him.

“The opposition force as fierce as it was used all manner of political gimmicks and backed by strong powerful forces in Abuja derailed his plans to ensure the emergence of his choice candidate. The Abuja group was known to have the backing of then PDP National Chairman Ahmadu Alli

“Despite the potency of his powerful onongongo group, Udenwa seemingly failed to even prepare a successor before the big fight broke out in the party. It was observed that at no time he had a successor in mind. This was evident when he selected Engr. Charles Ugwu as an emergency successor at a time Senator Ifeanyi Araraume and co had piled the heat on him.

“In the end, a combination of external forces aided him to settle for then little known and less fancied Ikedi Ohakim of the Progressive Peoples Alliance, PPA

He noted that in Governor Okorocha’s case, the biggest opposition to his succession plan was wrong choice of successor “which led to massive opposition from a sophisticated electorate in Imo”

“While Udenwa settled for an “emergency” successor, Okorocha had his succession plans well laid out after his first tenure.

Mr, Uzodinma faulted the decision of Okorocha to drop his Deputy, Eze Madumere in his succession plan

“He (Okorocha) had schemed out his loyal Deputy, Eze Madumere, who would have been a potent force in his succession agenda if he had chosen the latter, as Madumere’s candidature would have assuaged pro zoning adherents who had rooted for an Imo Governor of Owerri extraction at a time the tenets of fairplay and equity were strongly propagted in electing a new Governor.

“Okorocha’s grievous error was his choice of son law, Uche Nwosu as successor. Not that the young man was not competent, but his selection defied the tenets of zoning and besides, many believed that Okorocha was keener in building a political dynasty in Imo State as attested to by APC National Chairman, Adams Oshiomole. The attendant effects of his choice successor spiraled into many political negatives that bruised him politically such as his suspension from the APC and Nwosu’s eventual loss at the governorship election.

“Like Udenwa, Okorocha’s major opposition to his succession plan began in his backyard- his political party, the All Progressive Congress, APC who congregated under the umbrella of a coalition to fire ballistic political missiles at the Governor with the aid of the National Chairman of the party who was visibly opposed to his choice of Nwosu as the governorship candidate of the All Progressive Congress, APC

According to Mr. Uzodinma, the biggest beneficiary of the entire political drama in Imo politics in 2019 is the Peoples Democratic Party, PDP.

He continued “The Coalition and the opposition, particularly the Peoples Democratic Party, PDP who were desperate to return to power after 8 years out of office, formed an “invincible and unknown alliance” that found accommodation in the congregation of aggrieved Imolites who went for Okorocha’s jugular by opposing his son in law, Nwosu from taking over from him.

“From his (Okorocha) suspension to the party to Nwosu’s eventual loss at the governorship election, the key factor that led to the failure of Okorocha’s choice successor was the exclusion of the elites in the governance of the State and introduction of an unknown pattern of governance described as “Familocracy” which was more beneficial to select few to a greater majority.

He stated “One common feature in the Udenwa and Okorocha’s inability to have successors were  lack of consensus approach in their selection. Most of the would be successors were either handpicked without inputs from key and crucial sectors of the Imo polity.

“A state as advanced politically like Imo State, no Governor can go solo in orchestrating a succession plan

“Ignoring the elites, stakeholders who remain the heartbeat of the Imo polity in selecting a successor was at their own peril” he concluded

innonews - January 14, 2022 0
BY JOE ELUCHIE The declaration of intent to vie for Owerri zone senatorial seat by Former Secretary to Imo...