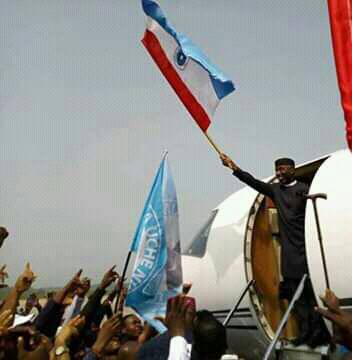 The trouble rocking the Action Alliance, AA may be over with the ratification of the indefinite suspension of its National Chairman, Chief Kenneth Udeze and National Secretary, Vernimbe James.

This can be said to have given a relieve for Uche Nwosu, the party’s governorship candidate in Imo State.

The duo were suspended after they made ugly remarks on the candidature of Uche Nwosu, the party’s governorship candidate in Imo State.

Udeze and co had put spanner in the wheel of Uche Nwosu’s governorship bid when he announced that the party has withdrawn Nwosu’s petition at the election petition tribunal.

The decision was taken by the highest decision making body which deliberated on the allegations leveled against them and upheld the initial suspension order.

The meeting was supervised by officials of the Independent National Electoral Commission, INEC which looked at the allegation that the duo made away with the property of the party.

The suspended Chairman had sacked the executives of the party in Imo, Lagos and Osun State chapters

Imo State Chairman of the party,  Hon Uchendu Ahanekwu,  spoke on the issue and on its governorship candidate, Uche Nwosu

He said “The party it is in full support of Uche Nwosu’s ambition to “reclaim his governorship mandate in the state”.

“It is so unfortunate what is happening today especially in my state, Imo. Only God knows how he does his things that a very vibrant and astute politician of Imo state extraction came into the party with a whole lot of credentials. We won comfortably 8 houses of assembly and two federal constituency seats.

“However, we have other cases in court like in Okigwe, Imo North, we are hopeful where INEC is yet to declare a winner and we are very close to victory.

“In all this, our former national chairman in person of Kenneth Udeze who ab initio was not helpful to the party in the state and didn’t do anything for us, we kept faith believing he will have a change of mind but it came to a height where he connived with the PDP in Imo state to deny us of our victory. And he said we won’t have a headway with Uche Nwosu at the tribunal.

“It is very disheartening that a man who claims to be learned will go on air to say that the party has withdrawn from the case which is still before the tribunal. I want to assure Nigerians that the purported sack of Imo state executive and those of other states is a nullity because he (Udeze) had since been suspended earlier in June”, he stressed.

innonews - May 18, 2021 0
The spokesperson of the House of Representatives, Benjamin Okezie Kalu has said the lower chamber of the National Assembly is set to...

innonews - March 16, 2018 0
The Police in Imo State has issued a stern warning to a faction parading to be the authentic leadership of  the All Progressive Grand...