Home Viewpoint Sex For Grades In Tertiary Institutions:What Of In Secondary Schools? By Dr.Chuks... 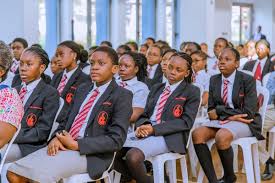 Recently, the Country’s Media Spaces were dominated by News, Commentaries, Features and other outburst contributions in respect of the 2 major incidents of sex for grades reported in the University of Lagos and in another University in Ghana.

The flood of condemnation which followed such practices in our Tertiary Institutions was enormous and wide spread. Surprisingly, such furies of Public Outcries were shocking. Because, those two incidents came into limelight following an undercover BBC Female Correspondent.
Honestly, it was rather surprising that

such a plethora of commentaries and expressions of condemnation was rather shocking because every right thinking mind in this country knows that there have been such rots of sex for grades going on in our tertiary institutions. The only thing we may know or not know is that the magnitude of such animalistic behaviors varies from institution to institutions.

Today, many institutions have reacted so positively, in order to ensure that they are not made escape goats in any issues that have become common knowledge. Yes, while the uproar raised by those two incidents are gradually dying down, and while many institutions have begun to take measures to ensure that they are not caught in the web of such scandals, some lecturer’s in various institutions, who are usually the master minds of these scandalous behaviors must have reclined a bit, it does not mean that such primitive behavior of asking for sex for greater grades are stoppable. No, it will be difficult to stop. All we can do is the exposition of “bad ones” among the lecturers and the “bad ones” among the female students who see sex for high grades as the only way to make it through their career in the universities and who find any corrective measures uncomfortable.

However, while the society may be focusing its attention on Sex for Grades in the Higher Institutions, unknown to us, there is another major problem raising its ugly head in our Secondary Schools. It is the practice of Sex for Grades in Secondary Schools, in our society. This practice has some outrageous dimensions in our secondary schools without we the parents, guardians and school authorities thinking about them or even recognizing the fact that such misbehaviors do exist in our most primary institutions particularly in these secondary schools where boys and girls remained together in what we used to call “Co-ed” schools.

According to Modibo keita, Former Mali President and a Foremost African Nationalist, “Civilization is good for our society, but it comes with an Unafrican behavior which tends to cancel out all the good things which civilization brings.” For example, many years ago, Christian Missionaries who were the forerunner of Civilization in African Nations tried to establish separate secondary schools for males and for females. For instance, here in the South East, we can remember some highly prestigious secondary schools for both the males and females established separately. We can remember, St. Augustine’s College Nkwerre, Stella Maris College Port Harcourt, Dennis Memorial Grammar School Onitsha, Christ the King Secondary School Onitsha, and these were for the boys. That of the girls were as follows: Girls Secondary School Elelenwa near Port Harcourt, Queens College Lagos, Awkunnani Girls Enugu and indeed many girls secondary schools scattered all over the society.

Of course, there is no doubt that the missionaries were the forerunners of civilization and also that of discipline. They saw in advance the danger of mixing boys and girls in the same school to study together. For example, the subject of sex education which many avoid to discuss with their children is properly and safely handled in school due to the fact that most of the boys and girls in secondary schools are at puberty age where they should begin to know about sex related issues and their body.

Very unfortunately, since the end of the civil war, when most of the missionaries left, the Government has begun the process of opening Co-educational Secondary Schools commonly called “mixed.” There are so many Co-educational schools mostly owned by private individuals (business men), which amount to contradictions because they do not care about the behavior of sex for grade rearing their ugly heads.

As a Senior Citizen, who is involved in the practice of doing Research and monitoring Public Opinions, I cannot pretend not to have heard of the growing misbehaviors amongst teachers in these mixed schools. No I can’t deny that.

Recently, I was shocked to the marrows, when a seventeen year old female student came to my office in tears and reluctantly but courageously told me of how a male teacher in her school who had been disturbing her over a long period demanding sex from her. This story is very pathetic because she insisted in resisting the male teacher, but he kept threatening her including “dealing with her.” After managing to ward off the teacher, all to no avail, she packed all her belongings and left the school for a female secondary school.

In our conversation, she insisted that “she blames the proprietor of the school for recruiting young male teachers, knowing that there are many other girls in the school who are being regularly harassed by the male teachers.

In fact, the full conversation is not only pathetic but brings to the fore what our daughters and female students are suffering in the hands of some of this so called “carnivorous” male teachers in private secondary schools, in our society.
Painfully enough, we send our children to school to be educated and also impact moral ethics in them.

Therefore, it is comprehensively reprehensive for these girls to be given wrong sexual education to the extent of being lured for sexual directions, most of them under aged. Therefore the Ministry of Education in the State now is headed by a No Nonsense Lady, Professor Mrs. Viola Adaku Onwuliri, She should focus her mind on this privately owned mixed schools to ensure total discipline and that female students in these schools are well protected because in many instances, they are mostly naïve and helpless.

innonews - January 30, 2019 0
*Buhari Tells Imolites To Vote Candidates Of Their Choice* *APC Not In Alliance With Any Political Party- Oshiomole

innonews - January 26, 2020 0
BY KEMDI OKECHUKWU Ms.Miriam Onuoha, the candidate of the All Progressive Congress APC for the Okigwe North Federal Constituency...

innonews - May 31, 2021 0
Barcelona has officially signed Sergio Aguero from Manchester City. The LaLiga giants made this known in a statement on...