Home Viewpoint Way To Go In The Reconstruction Of Roads In Imo As The... 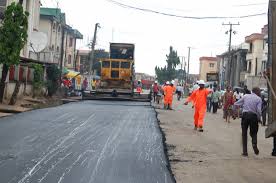 Few days to the expiration of his eight years administration in Imo State, May 24, 2019 precisely, the immediate past governor, Rochas Okorocha boasted, characteristically, at a gathering in Owerri, saying quote: Definitely, there is nothing in Owerri the new governor will do, nothing in Owerri; not roads any more, not schools, not hospitals, not buildings, unquote.

Okorocha was speaking during the commissioning ceremony of late Justice Oputa Court complex, in the presence of enlightened and discerning Imolites, including our esteemed members of the bar and bench who are well grounded in Imo politics, and are not in any way oblivious of the realities of governance in the State then. Deep down in him, Okorocha knew he was not telling Imolites the truth because a closer look at his administration revealed decay and rot in almost every sector of the state economy. Today, the high level infrastructural deficit in Imo State, particularly road infrastructure, has vindicated analysts who have continued to say that “the administration of Okorocha in Imo State was a scam— the more you look, the less you see.”

Contrary to what Okorocha said then, there are many bad roads today waiting for the new administration in the state to fix. All the roads the former governor claimed to have built, and which renowned structural and civil engineers have described as sub-standard, developed potholes and gullies soon after they were constructed. Some have collapsed with the heavy rains. As we speak, there are no accessible roads in Imo State any more.

From Owerri to Orlu, Owerri to Okigwe, Owerri to Mbaise and Owerri to Ohaji axis, including intra-city roads, such as Umuguma, World Bank, MCC-Uratta, Chukwuma-Nwoha, Toronto-Roadsafety roads, the story of bad roads is the same.

The consequence of this is that motorists and residents plying these roads have suffered untold hardship. They have been traumatized as they meander through the stony and flooded roads every moment in their daily socio-economic activities. While private vehicle owners in the state have long parked their cars and resorted to the use of commercial vehicles, the commercial drivers themselves speak woes of vehicle break down daily on the bad roads. The experiences of Imo people on these horrible roads across the length and breadth of the state can best be captured in the various live programmes of FM radio stations in Owerri, when they open their phone lines for people to call and express their feelings. The peoples’ reactions have mainly centered on curses upon whosoever created the problems in the first instance for them. Little wonder therefore, the unending SOS call on the new administration in the state to take urgent steps to do the needful.

Yes, the people have every right to make such demands from government they recently gave fresh mandate to lead them. It is indeed heartwarming to note that the new administration under the leadership of Rt. Hon. Emeka Ihedioha, upon inauguration, gave Imo people assurance of rebuilding the damaged infrastructure by the past government. The promise was without a plea by the governor to the people for patience and understanding. To let Imo people know the seriousness of his rebuild Imo agenda, the governor in August 2019 flagged off the construction of 14 roads that needed urgent attention as part of the activities marking his 100 days in office. Poly Nekede-Ihiagwa-FUTO road was used by Governor Ihedioha as the flash point for the road construction projects. The mere presence of the governor and his entourage that day, including a team of foreign contractors who are to handle the projects, was a big relief for residents and motorists in the area that the collapsed road would at last, be constructed for them.

In his speech, governor Ihedioha whose mantra in public service has remained “My word is my bond” used the occasion to reassure Imo people that massive road construction and rehabilitation would commence as soon as the rains were over.

When the rains appeared not to be stopping as expected, and the roads continued to worsen by the day, mixed reactions continued to trail the governor’s earlier appeal to the people for patience.

Even when palliatives and engineering designs aimed at maintaining standards were being done on the roads, detractors and political opponents cashed in on the efforts and continued to criticize and condemn an administration that is less than five months as if the problem induced by bad governance of the Okorocha administration was the making of the present one. Nevertheless, as a focused administrator, such unconstructive and unwarranted comments did not deter Ihedioha as plans and negotiations with development partners went ahead to hit the grounds running.

Now, the rains have subsided.Expectations are quite high. The only option left for Governor Ihedioha is to begin to work the talk and fulfill his promise by mobilizing to sites all contractors that have been engaged to do the jobs. Happily, the cheering news is that work has begun on some of the roads, including the Poly Nekede-Ihiagwa-FUTO road. Just as Governor Nyesom Wike of Rivers State did recently when he signed contract for the building of three flyover bridges in Port Harcourt, Governor Emeka Ihedioha should strive to pay the contractors at least 70% of the contract sum to enable them to embark on aggressive work without any excuses of contract variations.

Also, the contractors must be closely monitored to ensure that work is done according to specifications. Government should at the same time clear all issues of possible payment of compensations to genuine persons whose property would be affected by the construction work. More importantly, support from stakeholders is highly needed to encourage the contractors to complete the projects in record time. As a matter of necessity, government should partner security agencies in the state in guaranteeing safety of lives and property of the contractors and their workers. Also, traditional rulers and town union executives in areas where the road projects cover should guard their youths against unwarranted demands from the contractors in order to forestall delays in the execution of the projects. The contractors on their part should not fail to engage willing and available labour around the areas of their assignment as a way of keeping unemployed youths productive and busy.

When construction and rehabilitation of the roads commence in parts of the state, there is no doubt that motorists and commuters would experience uneasy traffic jam and blockages. This calls for caution by well-meaning Imolites who have been yearning for motorable roads. It is advisable that alternative routes and bye-passes should be created while work is in progress on the major roads. On the other hand, the contractors should, when necessary, work at night to avoid frictions with motorists and heavy duty trucks that may have no alternative than to use the roads.

Finally, while the rebuild Imo agenda has fully began with massive road reconstruction of the approved 14 road projects, all hands must be on deck to support the Governor, Rt. Hon. Emeka Ihedioha to go on with other capital projects beside roads which are needed to ensure proper and even development in Imo State.

Uzodimma: There Is Nothing Called Unknown Gunmen, Opposition Afraid Of My...

innonews - April 4, 2022 0
Imo State Governor, Senator Hope Uzodimma, has said there is nothing called unknown gunmen, stating that the resurgence of insecurity in the...

innonews - November 10, 2020 0
FROM= EVEREST EZIHE,Owerri Following the row that have effected socio economic activities in Nigeria rural communities as precepitated by...

innonews - June 10, 2020 0
Senator Samuel Anyanwu (Sam Daddy), who represented Imo East in the senate, may be handed over the leadership...