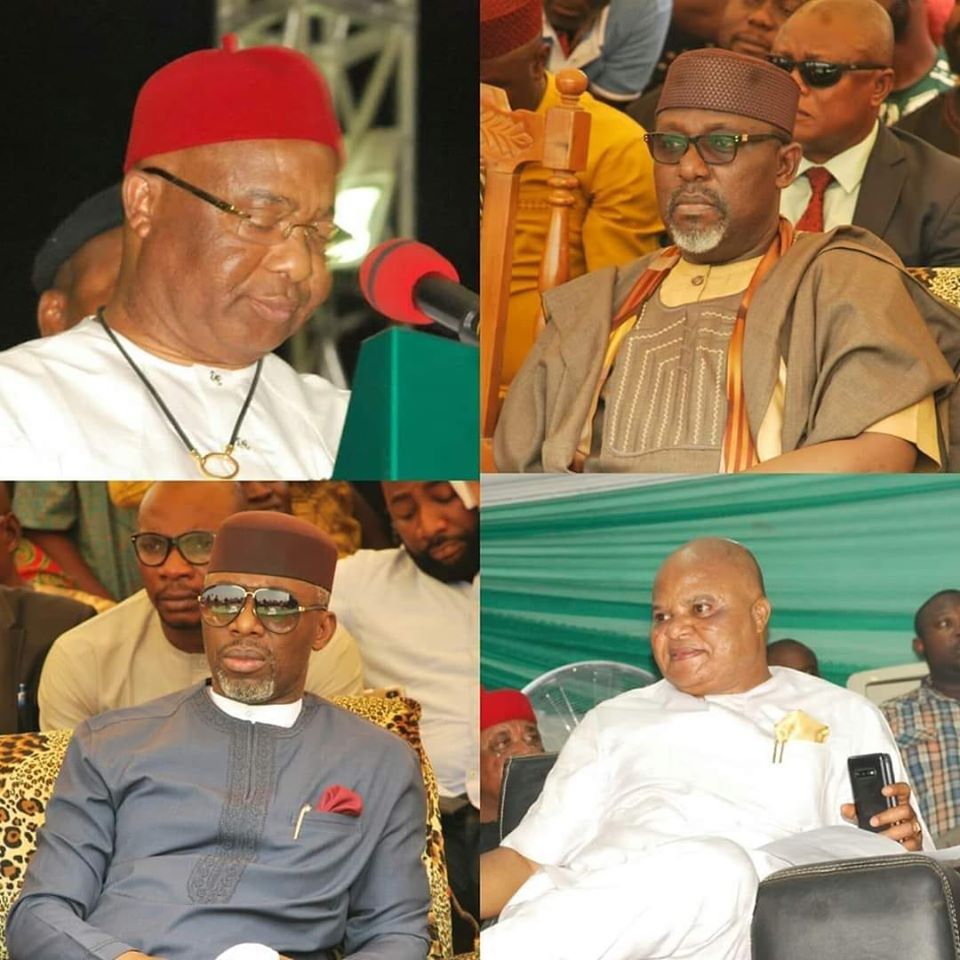 The emergence of Senator Hope Uzodinma as Governor, Imo State, via the declaration of the Supreme Court, has led to sharing of spoils of victory between contending power blocs that exist within the fold of the party.

They in one way or the other share in the joy of Uzodinma’s emergence as Governor.

The four key power blocs are Camp Hope, the official political structure of Governor Uzodinma, Imo APC Coalition, an assemblage of party faithful who spearheaded the battle for the soul of the APC during Okorocha’s reign, the Rescue Mission group loyal to former Governor Rochas Okorocha and Uche Nwosu, and new entrant, the Destiny Organization fiercely loyal to Senator Ifeanyi Araraume.

Former Governor Okorocha set the ball rolling last week when he called for the inclusion of his “boys” in the Uzodinma administration.

Tension had arose within the fold of the camps recently when Governor Uzodinma turned down the plea of suspended Local Government Chairmen elected during Okorocha’s reign to be reinstated.

He rather promised to hold Council elections soon directing Directors of Administration of General Services, DAGS to take over the affairs of the 27 LGAs across the State.

But inside sources told this newspaper that Governor Uzodinma is disposed to form an “APC family Govt” to acomodate all shades of interests of each of the power blocs that exist in the party.

While members of these blocs will get juicy appointments both at the State and federal levels, their key players and leaders will also get juicy part of the sharing arrangement.

Uche Nwosu who is the defacto leader of Okorocha’s Rescue Mission is said to be positioned for a lucrative federal appointment pending when politics of 2023 begins.

There are feelers that Senator Ifeanyi Araraume under this arrangement will drop his serial governorship ambition, in preference for Okigwe Senatorial seat which became vacant after the untimely death of Senator Benjamin Uwajumuogu. Araraume is however entangled in a cold war with the Caretaker committee in Imo State chapter of All Progressive Grand Alliance, APGA who accuse him of anti party activity over his recent romance with the APC.

He however looks unperturbed over the development as he joined other APC chieftains to drum support for the APC candidate in Okigwe North re run, Marian Onuoha who emerged eventual winner of the polls.

With Senator Okorocha comfortably sited as Senator representing Orlu zone, appointments for his Rescue Mission officials would do him good

A top source in the know of these ongoing arrangement said Governor Uzodinma is positively disposed towards achieving peace and cohesion in the party which will serve as a propelling factor that will lead to the actualization and success of his administration.

innonews - June 3, 2022 0
The court case which led to the sealing of branches of Zenith Bank in Imo State, is now before the Appeal Court.

innonews - November 21, 2017 0
Commissioner Nominees have been screened by the Imo State House of Assembly. The screening is a prelude to their final confirmation as commissioners. Majority...