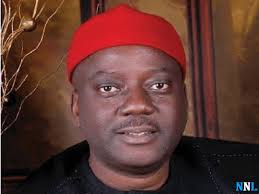 The tempo of tension in Imo State today, no doubt has steadily risen to a crescendo and can get worse and catapult into all time unprecedented political mayhem . It is clearly orchestrated. Possibly to provoke a gory attention of mischief makers and enemies of our people to begin to recommend “ state of emergency “ as only recipe to torpedo a government of the day in Imo state.

Ordinarily, I wouldn’t have loved to plunge into this controversy but according to a saying “ evil triumph when people of goodwill stay aloof, in the presence of open rape of the people’s patrimony by a few monstrous maniac”.I stand to say therefore ,that case of Imo insecurity sponsored by a few powerful individuals should seize forthwith. Nobody should be seen to be more powerful than the state, no matter “ how rich “ the person might be. The truth is that we should not be mistaking “ institutions for individuals “ who occupy the institutions. We must rise above political and egoistic sentiments and put the matter in it’s proper perspectives.

I don’t get the idea or accept the action of an ordinarily “ a statesman “( having served as a Governor for eight years and still in the Senate) will be “ poking hands into the eyes of his successor to the office of the Governor.!. Absolutely provocative!. The action of taking laws into one’s hands is to a layman’s point of view is a  resort to self help which can trigger into lawlessness and chaos leading to senseless bloodshed. Nature abhors vacuum. Imo State is not in a state of interregnum where government is not in place .

There’s government in place. Who ever tries to demonstrate otherwise to undermine the government in place , to say the least and in truth to the constitution of the Federal Republican Nigeria is soliciting and calling for a big trouble upon his head with attendant catastrophic consequences. Yes. This is without fear or favor.Every time we make references to our brothers in the North how they handle power and transit out of power. But do we Learn any lesson from them?

Take for example , how many Ex Northern Governors have we heard stays in the states they governed or go back to flex muscles with their successors within their States? Never! Rather they will quietly relocate and concentrate in Abuja to play national politics or go into farming. Okorocha with his numerous friends in the North should understand this better but may not comprehend the security implications of these peoples practices.Another meaningful example worthy of learning for understanding by our Igbo influential and powerful political elites, is the deposing and replacing of powerful kings in the North call it Emir or Sultan.

You find out that when an Emir is removed ( either rightly  or wrongly) he is not allowed to dwell within the Emirates where he hitherto ruled. He must relocate to allow the new sovereign to reign. When will people who are “ rich or stolen government money” stop thinking they are more powerful than the government!?.

This is the crux of the matter between the Okorocha/Uzodimma imbroglio that manifested last Sunday and still trends on.I have heard about all legal windows which is said that might have emboldened  Okorocha as a former Governor to bite the bullet open chested because of a sealed property, Haba ! How vain man can be. Why take such a senseless risk.? What if he has lost his life in the face of the wrath mob?. With all his acclaimed “ riches and property” scattered all over the world?  Haba Owelle, this world is vanity upon vanity equals to vanity.

But if you are too emotionally attached to this property ( possibly because as we hear the multi billion naira estate belongs to your dear wife)I believe as a law  maker , you should have gone to court to challenge the government and Imo state Exco decisions that gazetted the confiscation of the said property rather than resort to self help.“ thuggery and braggadocio that is not worth it. The law is supreme and is an ass .

This is a lesson to all . Onwa  Oyoko, Senator Hope Uzodimma is my age long political ally and friend but today he is the Governor there are things I cannot take for granted in relating with him, not out of fear or sentiments but because of the sacred office of the Executive Governor of Imo state which he presently occupies. I must accord him all the honor and due respect that office deserves and demands .Not to do so will amount to being foolhardy and stupid.

My appeal to all stakeholders in Imo state irrespective of political leanings is to give respect to the office of the Governor of Imo state and honor the Governor and give him all the required support and solidarity that will enable him correct some ills of the past and position our state on the part of economic growth and social stability.

innonews - January 14, 2018 0
BY BEN UGWU# The Rescue Mission camp of Governor Rochas Okororcha may have opted for a core “Rescue Mission Compliant and a non outsider” as...

innonews - September 27, 2017 0
The Peoples Democratic Party, PDP has dismissed the presidential ambition of one of its governors. Ayodele Fayose, governor of Ekiti State had declared his intention...