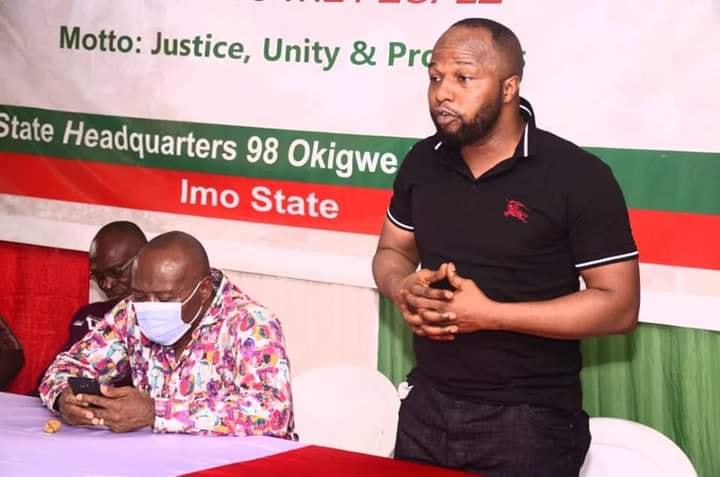 The People’s Democratic Party (PDP) in Imo State on Tuesday, April 27th, 2021 held a maiden capacity building session for the LGA Publicity Secretaries and the New Media Directorate as well as the LGA New Media Coordinators.

The meeting, which was powered by the Ezeani Center for Leadership and Entrepreneurship, marked the first formal interaction between the newly inaugurated New Media Team and the Party’s Publicity Secretaries and New Media Coordinators across the State.

In his opening remarks, the State Publicity Secretary, Ogu Bundu Nwadike thanked all who  came despite the security challenges bedevilling the State. He explained that the essence of the meeting was for familiarization, building of synergy, stock-taking and setting the agenda for the future. He expressed confidence in the quality of minds assembled by the Party as image makers, and charged them to work for a greater PDP.

The State Chairman, Engr. Charles Ugwuh, who was represented by the Deputy Chairman, Sir Martin Ejiogu, urged the New Media Team and Publicity Secretaries to resist the temptation of aligning with particular leaders or aspirants, but to work in the overall interest of the Party. He berated the APC-led administration in Imo State for the festering insecurity in the State and prayed for the safety of Imo people through the turbulent moments.

In his address, the Party Secretary, Hon. Ray Emeana, emphasized that there are so many issues of misrule going on in the State, and charged the Party’s image makers to be factual, accurate and professional in reporting these issues. Emeana added that the priority of the Party is to win resoundingly at the polls, and said the consciousness for that should guide the activities of the media teams.

Speaking, the Director-General of the State New Media, Prince Collins Opurozor enjoined the team to create awareness about the indefensibly bad governance in the State, and said the New Media tools should be utilised properly to sustain narratives which will make the Party’s victories at the polls incontestable.

He encouraged everyone to join hands together to ensure that the Party’s vision is actualised and the the APC is dumped in the museum of history in Imo State.

innonews - July 5, 2018 0
The All Grand Alliance Party, AGAP has vowed to align with the Peoples Democratic Party, PDP and other political parties to form a “3rd...

Ihedioha Breaks Silence,Vows Never To Give Up Struggle For Better ...

innonews - March 8, 2020 0
Former Imo State Governor, Emeka Ihedioha has said he will never give up on the struggle for a better Imo State.