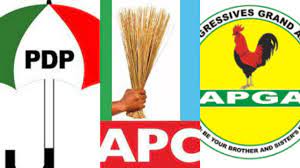 The Peoples Democratic Party, PDP, and the All Progressive Grand Alliance, APGA in Imo State, Monday, reacted to reports that most of it’s leaders are leveraging on the visit of leaders and stakeholders of the 27 LGAs to Governor Hope Uzodimma, to join the All Progressive Congress, APC.

Some top chieftains of the APC told INNONEWS at the weekend, that some PDP leaders who were part of the various LGA delegations, have concluded plans to support Governor Uzodimma and join the APC.

Debunking the allegations, New Media Director, Imo PDP, Mr. Collins Opurozor said it is not true that the presence of some PDP leaders, at the visits meant they have joined the APC.

Mr.Opurozor said “Our leaders were present at the meetings because they are stakeholders and leaders in their various governments. The visit was not purely an APC affair.

“They can came to see Governor Uzodimma because the governor said he alone cannot guarantee the security of the State.

The All Progressive Grand Alliance, APGA, in the State, denied allegations that some of its members who were part of various delegations of some local governments to visit the governor

A statement signed by State Chairman of the party, John Iwuala reads:

“My attention has been drawn to the fake, malicious and misleading news making waves in various social media platforms where the staggering leadership of APC claimed they received the Ezinihitte Mbaise LGA Secretary of All Progressives Grand Alliance, APGA into their party.

“It has never been our usual practice to respond to such baseless and frivolous claims, but in order to put the records straight and stop the APC from further misinforming and misleading the reading and unsuspecting public, I do hereby states as follows:

“That Ezinihitte LGA APGA Secretary is not from Ihitte as claimed by the APC in their misleading and fake news.

“That Ihitte is from Ezi-West Geo-political zone in Ezinihitte Mbaise LGA.

“That the LGA Chairman of APGA is from Ezi-West, so there is no way the LGA Sec can come from the same Ezi-West.

“Someone somewhere might have deceived the senseless APC into bowing down for him as APGA Secretary in Ezinihitte LGA. Again, the position of the secretary of APGA in Ezinihitte has never been in contention as the party is in peace, where we could have asked if it is an aggrieved member or factional Secretary…. No nothing like that exists in Ezinihitte LGA Chapter of APGA.

For the information of the reading public… No reasonable person in his/her right thinking state of mind can leave his/her position in APGA and join APC in Mbaise considering the security situation which the said party have put us into.

That APGA Ezinihitte is fully intact and no one intends joining APC to be part of their Shared Poverty, Curse and Bloodshed.

For your information once more, and to avoid the empty boasters of APC; the LGA Chairman of APGA in Ezinihitte is Hon Tochukwu Onuoha (Ekwe), from Chokoneze, Ezi-West, while the LGA Secretary is Hon Damian Abii from Eziudo in Ezi-East.

It’s always in the notice that the dieing APC in Mbaise have resorted to posting fake news to please their Owerri Masters in believing that they have penetrated APGA leadership in Ezinihitte LGA, knowing fully well that APGA Ezinihitte Mbaise Chapter is vibrating and have been on ward by ward tours, sensitizing the party and receiving new members.

It is also not surprised to read such trash from the APC as we have known the party and her leaders as manufacturers of lies… Check out their Alhaji Lai Mohammed. Check out also the kinds of Executive lies from their Executive Governor of Imo State always.

It is on record that the increasing numerical strength of APGA in Ezinihitte has become intimidating to the ruling party as showcased at the burial ceremony of the mother of High Chief Chrisogonus Ugochukwu, (Alhaji Usman) at same Ihitte a well as the outing of APGA at Amumara last Saturday’s burial of the mother of APGA Youth leader at Amumara ward 1, where APGA silenced all other political parties.

“We in APGA wish to advise the APC to burry their faces in shame as having divided houses across the state despite being in power both at the state and Federal levels.

“The entire Mbaise Nation have never benefitted anything from the current APC Government in the state.

“As it stands now, the road leading to the LGA Secretariat is completely a dead trap, while the ruling APC govt may be working to completely cut off Ezinihitte from the rest of humanity…. What a shame.

Indeed, any Mbaise born man or woman joining APC or rejoicing and romancing with APC suppose to be subjected to a Psychiatric test so as to diagnose the state of the person’s head and mental stability.

“This is so because the APC as a party have inflicted more harm, injury and bloodshed on our people, even far beyond what we cried out against the PDP.

“The APC is hereby advised to find a way and borrow brains and ideas to tackle their internal party squabbles and lend same to their Governor to understand how to handle and manage the rising insecurity in the state rather than pursuing shadows by spreading fake news that APGA LGA secretary have decamped to their collapsing and sinking political party.

“Come 2023, Ndimo will open your score cards and expose all your lies, deceit and evil agenda against our people and the development of the state” the statement concluded

innonews - April 25, 2019 0
The South East zone of the All Progressive Congress, APC is to meet this weekend to deliberate on sharing of leadership positions in...

Uratta Community PG To Contractors:You Have Turned Our Roads To Death...

innonews - March 25, 2018 0
A chieftain of the All Progressive Congress in Imo State, APC, Chief Vitalis Ajumbe has Imo State Governor, Rochas Okorocha has no right to...