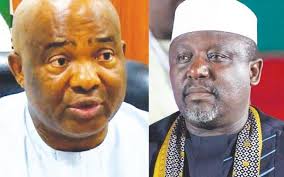 The deepening feud between Governor Hope Uzodimma and former governor Rochas Okorocha, over the soul of the All Progressive Congress, APC in Imo State, appears to have necessitated possible round table talks between the duo initiated by the national leadership of the Party.

The Mai Bala Buni led Caretaker Extraordinary Convention Planning Commitee, CECPC is said to be contemplating holding such round table talks between Uzodimma and Okorocha in Abuja.

Party sources told this newspaper that the meeting became imperative after Okorocha led some of his loyalists in his camp to the national headquaters of the party last week.

He was said to have complained that he has been completely sidelined from the affairs of the party since Uzodimma came on board as governor.

He later told newsmen at the APC national headquaters, that any action in the APC in Imo State, such as Congresses not supervised by Mr. Daniel Nwafor, whom he insists remains Chairman of the party in the State, is null and void.

Okorocha and members of his political family had shunned the party’s membership and Revalidation exercise.

Among those with him on his trip to the party headquaters include, Senator Ifeanyi Araraume, his son in law and governorship candidate of the Action Alliance, AA in the 2019 guber election, Uche Nwosu and former Secretary to Imo State government, Sir Jude Ejiogu.

The proposed Uzodimma/Okorocha meeting in Abuja, is said to be part of series of last ditch efforts initiated by Governor Buni led CECPC to reconcile warring party leaders, across the country before it eventually holds it’s Congresses and Convention, which it had cancelled indefinitely last week.

A party source said “Similar meetings will take place for other states, where state governors are quarreling with their predecessors over party structure.

“This is the next line of action of the CECPC and Imo State has been considered a key State to the APC, and this necessitated the need for possible round table talks between Uzodimma and Okorocha.

“The duo are two important pillars of the APC not just in Imo State but in the South East.

“Though State Governors are undisputed leaders of the party in their various States, we cannot allow their predecessors to leave the party because of reconciable differences

The APC had last week suspended it’s Congresses and National Convention after a leaked Letter to INEC, seeking rescheduling of the Congresses surfaced on the social media.

innonews - January 22, 2018 0
Manchester United have announced the signing of Alexis Sanchez from Arsenal in a deal that sees the Armenian midfielder Henrikh Mkhitaryan move in the...

innonews - June 6, 2021 0
. Heads of faith-based organisations in Imo on Saturday called on political leaders in the state to sheathe their sword and support Governor...