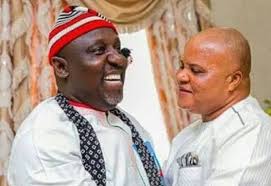 The camp of former governor of Imo State, Senator Rochas Okorocha have finally lost out in completely in re possessing the soul of the All Progressive Congress, APC, in Imo State.

Okorocha, his allies- Uche Nwosu, who was governorship candidate of the Action Alliance, AA in the 2019 governorship election, Senator Ifeanyi Araraume and thousands of their political footsoldiers, had stayed away from the ward congress held in the State recently.

They had before the congress boycotted the party’s membership and revalidation exercise, swelling speculations that they may leave the ruling party.

Okorocha has been at logger heads with Governor Hope Uzodimma over who controls the APC in Imo State.

While the former governor who represents Orlu zone in the Senate insists that his ally, Dan Nwafor, is Chairman of the party, Governor Uzodimma backed Marcel Nlemigbo led State caretaker Commitee continues to enjoy recognition from the national leadership of the party.

The ward congress, held last month, was dominated by those in the camp of Governor Hope Uzodimma, who produced the party executives in the 306 wards across the State, which entails total control of the APC structure at the grassroots level in the State.

Despite the crisis and political karate that trailed the exercise, which feuled suspicion of possible cancellation, the caretaker/extraordinary convention planning Commitee, CECPC, eventually ratified the ward congress in Imo State and in other states of the Federation.

In a statement signed by Senator John James Akpanudoedehe, Secretary, CECPC, a copy seen by INNONEWS, it “ratified and adopted the results of the party’s nationwide ward congress held on Saturday July 31st, 2021.

The party leadership directed that “the conduct of nationwide local government Congress proceeds accordingly by Saturday September 4th, 2021 as contained in the official timetable/schedule of activities released by the party”

innonews - January 9, 2021 0
PRESS RELEASE The Forum Of Imo-Based Newspaper Editors (FINE) has condemned the attitude of the state government under the...

How Ideato North Can Feed The South East, Says Ngoforo

innonews - October 30, 2019 0
By Jude Opara, Owerri Renowned philanthropist and Chairman of Ngoforo Foundation, Franklin Ngoforo, has said that the summary of...

innonews - December 6, 2021 0
BY ADANNA ONWUKWE The South East Coalition for Good Governance, SECG, has said the Igbo will not beg, kneel...

innonews - July 8, 2017 0
Following the alleged killing of a python by  men of the Nigeria Security and Civil Defence Corps and Imo Security Network in Owerr, the...