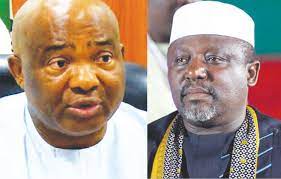 The All Progressive Congress, APC in Imo State will proceed with its State Congress on October 16, where a new Chairman and members of the State Executives of the party will be elected.

The congress is taking place amidst internal rancour in the party as squabbles between Governor Hope Uzodimma and his predecessor, Senator Rochas Okorocha continues to fester.

Governor Uzodimma and Senator Okorocha have been entangled in a cold war over who controls the party in Imo State.

Senator Okorocha has continued to insist that his ally, Mr. Dan Nwafor is the authentic Chairman of the party in the state based on a court judgment. The former governor alongside the Board Chairman of the Nigeria National Petroleum Company, NNPC, Senator Ifeanyi Araraume are opposed to Governor Uzodimma on issues bordering on the party structure in Imo State.

The duo had boycotted the APC Membership and Revalidation exercise to protest Uzodimma’s stronghold of the party in the State.

Only those in the camp of Governor Uzodimma had participated in the ward and local government congress held in the state last month. It is also expected that the forthcoming State Congress will be dominated by those in the political camp of the governor.

It was learnt that the political imbroglio rocking the Imo state chapter of the party may attract the intervention of the Senator Adamu Abdullahi led National Reconciliation Committee recently constituted by the Chairman,APC Caretaker Extraordinary Convention and Planning Committee, CECPC and Yobe State Governor, Mai Mala Buni.

Buni had inaugurated the Committee on Monday, with a charge to them to reconcile feuding factions in some states which increased after the ward and local government congress.

innonews - July 23, 2021 0
When British writer and political publicist, Ernest Benn came up with the claim “politics is the art of looking for trouble, finding...

innonews - May 6, 2022 0
Minister of Science, Technology and Innovation, Dr. Ogbonnaya Onu, has said he wants to be Nigeria’s Chief Servant. Onu,...