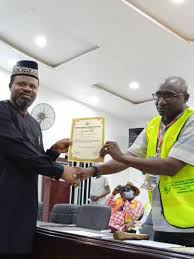 The Nigerian Union of Journalists, NUJ, Zone C, has felicitated with the National President of the Union, Comrade Deacon Chris Isiguzo on his re- election.

A statement signed by Comrade Ifesinachi Emmanuel, Vice President and Comrade Adiuku Eze, Zonal Secretary of the Union in the South East reads:

“The Nigeria Union of Journalists  (NUJ) Zone C, felicitates with our National President, Comrade Deacon Chris Isiguzo on his re-election to serve the Union for the next three years.

“Mr President,  your re-election with an overwhelming majority of the votes cast is an expression of the implicit confidence reposed on you by journalists across the length and breadth  of the federation.

“We, in the Zone (South East), are very proud of you as our son and brother.

“On behalf of the chairmen, secretaries of the five Councils of NUJ: Abia, Anambra, Ebonyi, Enugu and Imo, we pledge our unalloyed support and loyalty to you our National President and other members of the Central Working Committee  (CWC) to move our great Union to Greater Heights.

“It is our prayer that God Almighty will continue to bless you with wisdom, good health and favourable disposition to move  NUJ to a greater level.

Congratulations our own National President” the statement concluded.

In a related development, the newly elected Zonal Secretary of the Union, South East Zone C, Comrade Eze Adiuku, has assured of his commitment to serve the union.

In a letter of appreciation to his colleagues, Mr. Adiuku wrote:

“I wish to thank the entire journalists practicing in the South East especially the leadership and members of the five NUJ Councils of Abia, Anambra, Ebonyi, Enugu and Imo, for finding me worthy to serve as the Zonal Secretary for Zone C.

“This decision was affirmed at the 7th Triennial Delegates Conference held at Umuahia, Abia State on 7th of October 2021 and I am indeed humbled and honoured by your collective confidence in my ability to serve our great union for the next three years.

“As I promise to use my God-given abilities to serve you all and the NUJ, I equally solicit the support of each member in the Zone to achieve success for the good of the South East NUJ,  members and the society at large.

innonews - November 11, 2020 0
BY EVEREST EZHE In line with the role sports journalists play to aid football development and administration in the...

innonews - November 6, 2021 0
*Tournament kicks off Nov 14 The draws and unveiling of trophy for Imo 3R ISAMATA  football tournament for markets...

innonews - March 22, 2022 0
The Archbishop Emeritus and Apostolic Administrator of Owerrri Catholic Archdiocese, Most Rev Anthony Obinna, has given details how fire rocked the Assumpta...

innonews - October 1, 2021 0
The Ohaneze Youth Council, OYC, has warned the Peoples Democratic Party , PDP, of the consequences of not fielding an Igbo as...