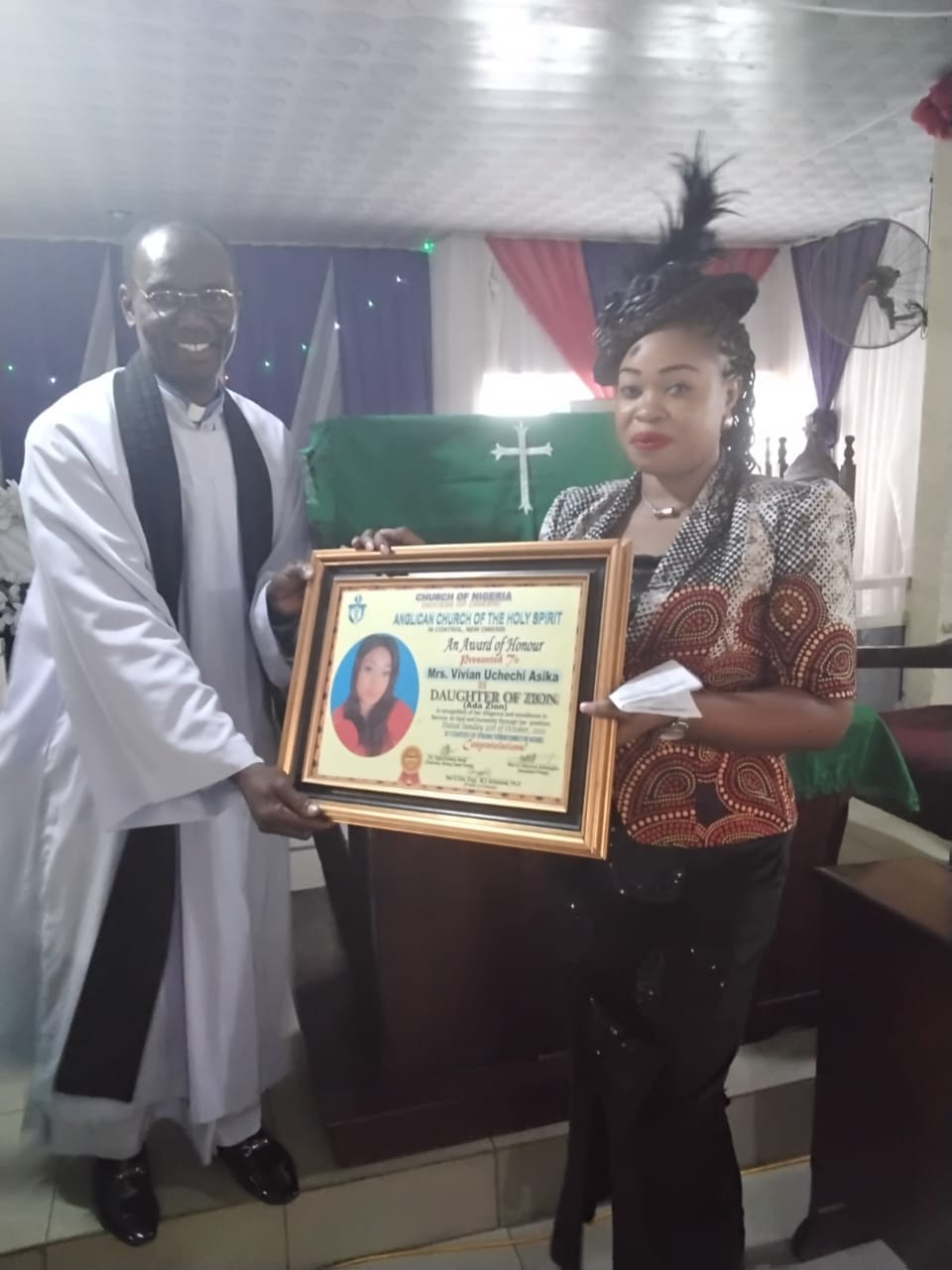 The Strong Tower Family of Anglican Church of the Holy Spirit in Control, New Owerri, has celebrated her day. The event which marked the grand finale of a weeklong activity witnessed a large turnout of Christian faithful.

In a sermon, a lay preacher and member of the family,
Evangelist Kelechi Arimanwa, charged Christians to always see God as their Strong Tower in all situations, adding that every Christian has their own problem which only God can deal with.

The preacher also stressed that in a time like this, believers have no option than to hold God as their strong tower who will never disappoint them.

The Strong Tower Family Day also featured many activities including the presentation of Awards to distinguished members and friends of the church.

A member of Imo NUJ, Mrs Vivian Asika of the federal Information Chapel was among the recipients.
Mrs Vivian Asika whose sterling performance and commitment in the church singled her out for the award was eulogised for her exemplary acts of commitment to the things of God.

The conferment which held at the Church auditorium, was well- attended by well- wishers of the awardee.

“THE AWARD OF DAUGHTER OF ZION was presented to Mrs. Vivian Uchechi Asika in recognition and appreciation of your outstanding contributions in the service of God”.

Responding, the award recipient, Mrs. Vivian Asika, expressed joy for the honour done her by the Church, pledging to redouble her service in the house of God.

In her words, Mrs Asika declared: “My heart is filled with joy over this award of honour from the church. I shall continue to do the good work.”

Meanwhile Mrs Asika has been receiving congratulatory messages on the award including that of the Imo NUJ Chairman, chief Chris Akaraonye who described the award as well deserved and urged her not to relent in her service to God and humanity.

innonews - February 5, 2019 0
Members of the public have been advised to shun and disregard any planned illegal debate organized by some of itS unscrupulous members...

innonews - July 24, 2021 0
Chairmen of the All Progressive Congress, APC, in Owerri Federal Constituency, have described Oyiga, real names, Gibson Njemanze, as an asset to...

Why Izunaso’s Petition Against Ibediro Will Not Stand- Imo Information...

innonews - July 2, 2018 0
Imo State Information Commissioner, Prof Nnamdi Obaireri at the weekend took to the social media to explain why Senator Osita Izunaso’s appeal against the...

innonews - July 20, 2018 0
The Nolloywood popular actresses and close friends, Uche Ogbodo and Uchenna Nnanna head to the gym for serious workout.  The two mamas looked like...

innonews - February 4, 2018 0
By Evarest Manabuchukwu#. Some concerned knights have raised an alarm over what they described as an impending but avoidable leadership crisis that may result from...