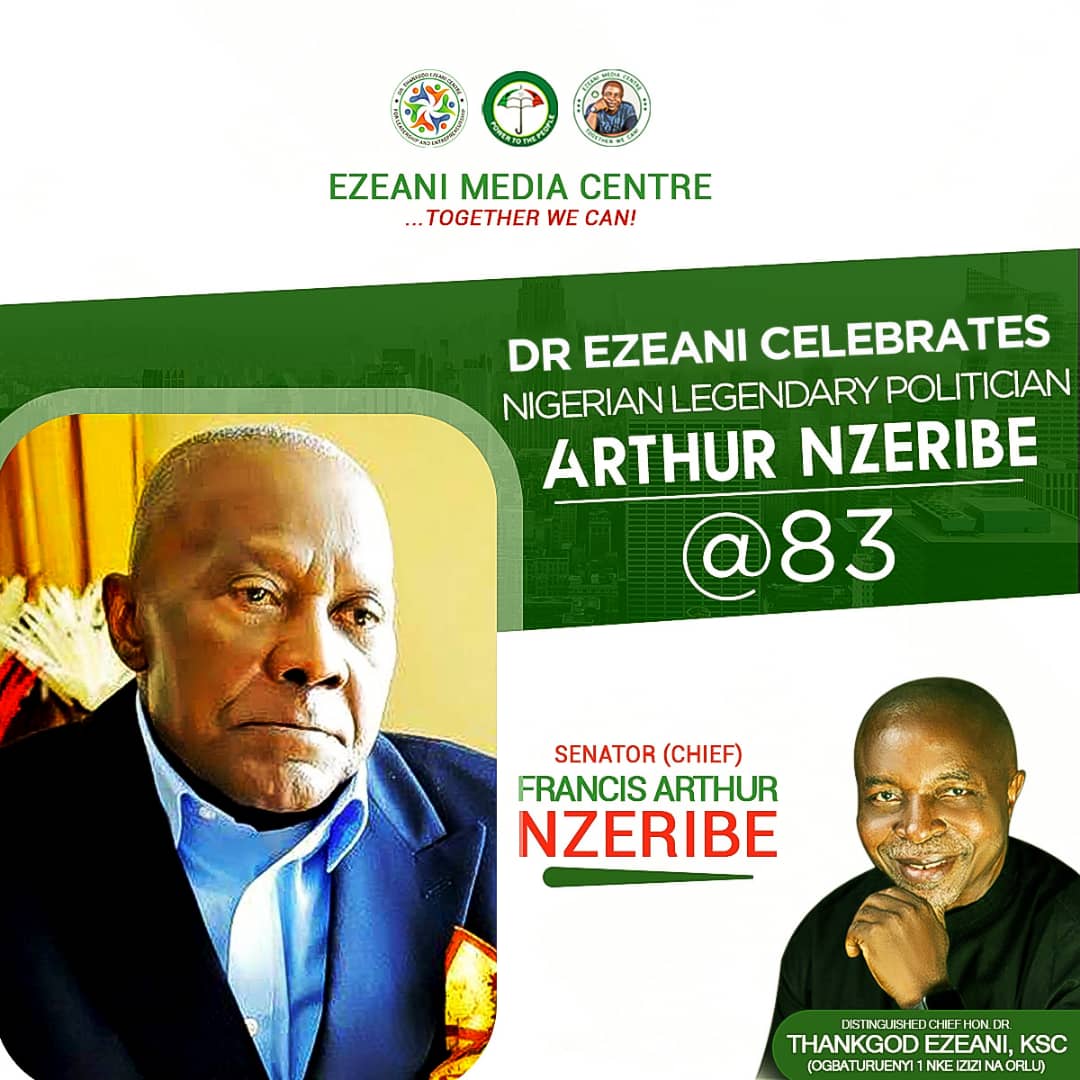 ThankGod Ezeani, Phd, a sucessful industrialist from Orlu zone and former member of the House of Representatives, has congratulated Senator (Chief)Francis Arthur Nzeribe, as he clocks 83 years, stating that the nation’s political history is not complete without Nzeribe.

In a statement released by Ezeani Media Centre, Owerri, and made available to INNONEWS, Ezeani, who is the founder of Dr. ThankGod Ezeani Centre For Leadership And Entrepreneurship, prayed God to lengthen Nzeribe’s years in good health and prosperity.

According to the statement, Ezeani described “Senator Nzeribe as a force to reckon with in Nigerian politics, a political juggernaut that sends cold chills in the spines of opposers, a successful technocrat, an industrialist and a builder of men”

According to him, “Arthur Nzeribe has on so many occasions demonstrated the bravery, strength, agility and intelligence that is synonymous with the Igbos and that is why Nigerian political history will never be complete without recording his achievements and prowess.

”The name and legacies of Senator Francis Arthur Nzeribe have been authored on the sands of time. I wish him a blissful birthday celebration and many more years ahead” he stated

Chief Senator Francis Arthur Nzeribe is an Orlu born Nigerian politician who was Senator for Orlu Senatorial constituency in Imo State, from October 1983 to December 1983 and from May 1999 to May 2007 on the platform of the Peoples Democratic Party (PDP).

The statement stated further “Many Nigerians will not forget this Octogenarian in a hurry, not because he was a Senator who once represented Orlu Senatorial District at various times or because he is one of the super-rich king makers from the South-east region, but largely because of the splendiferous efforts he made and the name he created in Nigerian political and economic history during his time.

“This Multi Millionaire Investment Mogul from Oguta LGA is an intellectual and a gifted writer whose books such as Nigeria: Another Hope betrayed: The Second Coming Of The Nigerian Military, Nigeria: The Turning Point, A Charter for Stability, Nigeria I believe, A Manifesto for the Third Republic, amongst others impacted knowledge, ideas and made undeniable impacts within the country and beyond”

innonews - June 7, 2017 0
The Federal Government yesterday said it had released about N375.8 million for payment of 20 whistleblowers who gave useful information that led to the...

innonews - January 7, 2019 0
The Federal Government has distanced itself away from a press release circulating that President Muhammadu Buhari has ordered the arrest and...