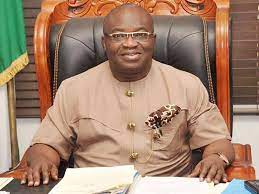 Indications have emerged that Gov Okezie Ikpeazu and his predecessor ,Chief T. A Orji may have settled for the immediate past Vice Chancellor of Abia State University,Prof Eleazar Ikonne, as the next governor of the state.

Our correspondent gathered that the agreement to hand over the ticket to Ikonne was reached on Saturday night in Umuahia, Abia State capital, after the governor held an all night meeting with his predecessor.

It was not known what arguments Ikpeazu advanced to TA Orji, popularly called Ochendo, for him to change his mind as the Senator representing Abia central in Abuja had earlier canvassed the ceding of the Governorship to Abia North in the spirit of the state charter of Equity.

But the source expressed surprise that Orji could recapitulate just two weeks after he declared support for Abia North.

“I don’t know what they bargained for Orji to disappoint millions of his supporters after his historic declaration in support of Abia North.

“But what ever it is, Ikpeazu was satisfied leading to his meeting with Prof Ikonne at Umuobiakwa where he told former VC that he is now the anointed one.

“Ikpeazu specifically told Prof Ikonne that a stakeholders meeting will be convened this Friday where he will be formally announced as the preferred successor” the source stated.

It was learnt that Orji will on that Friday also declare support for Prof Ikonne.

The PDP in the State had against the run of play announced the zoning of the 2023 Governorship to both Abia Central and Abia North Senatorial zones.

Both the former Senate President, Adolphus Wabara, as well as other leaders have condemned the move , insisting that it is the turn of Abia North to produce the next governor in line with the Abia State charter of Equity.

Atiku Supporter Who Rode Bicycle From Owerri To Abuja Hospitalized

innonews - October 22, 2018 0
Online reports have revealed how a supporter of Presidential candidate of the Peoples Democratic Party, PDP, Atiku Abubakar who rode a bicycle from Owerri...

innonews - October 2, 2017 0
Ebonyi State Governor, Dave Umahi has advised members of the Peoples Democratic Party, PDP to refrain from insulting President Muhammadu Buhari and the All...

innonews - December 5, 2017 0
The Majority Leader, Imo State House of Assembly Hon.Lugard Osuji has resigned. He announced his resignation on his facebook wall Tuesday afternoon. In a chat with...