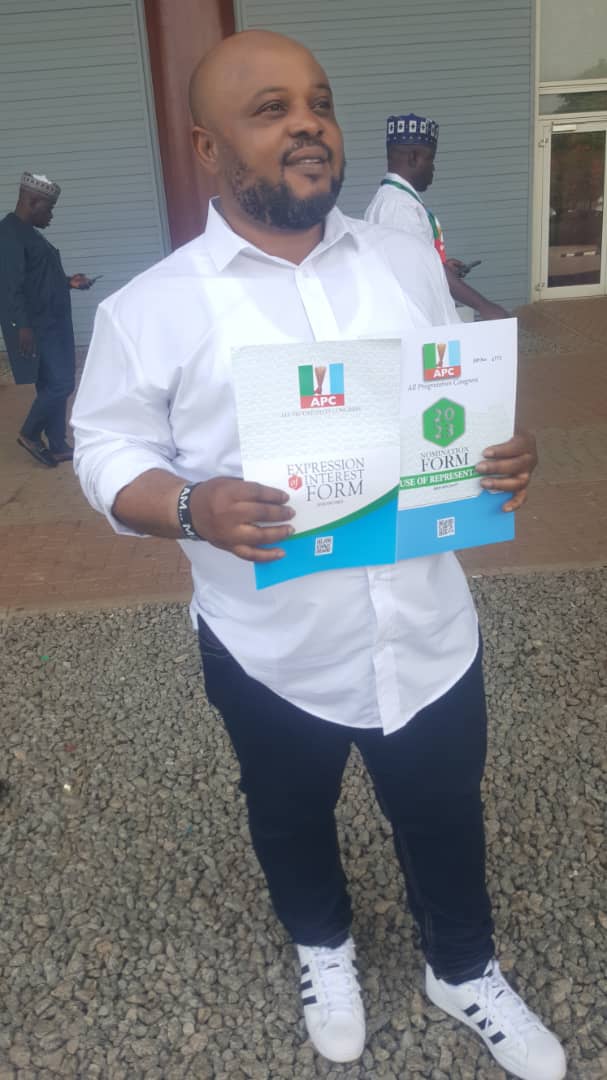 It was an outpour of joyful emotion on Thursday, when news filtered in  across the three  local  government areas of Okigwe South that Chief Sir Ikenna Chukwuocha, popularly known as White Lion, has purchased nomination form to contest the 2023 House of Representatives  seat for Okigwe South Federal Constituency on the platform of All Progressive Congress Party (APC).

The youths, the young and old, men and women  in the Federal Constituency heaved a sigh of relief because  White Lion  known as  Champion of the Youths, who has shown compassion and benevolence to the needy,  even without political power, has jumped into the  ring of the House of Representatives contest to deliver his people through effective, dynamic and pragmatic representation.

The entire Constituency has resorted to prayers and supplications to God so that the ticket of the most powerful political party in Nigeria, All Progressive Congress Party, APC,  will  be given to him.

One of things that goes for Sir Ikenna Chukwuocha  is his large heart. His has demonstrated  enough commitment to help salvage Okigwe South Federal Constituency even as a private citizen.  No wonder the moment his nomination form was flashed in the public space, his teaming followers and all those who have been waiting for such a time became hilarious. The form has cleared all doubts about the possibility of his contest and fortified resolution of the people of Okigwe South to work with him to actualize his dream in the interest of all. The form is a sign of seriousness by a man who has walk the talk.

For the few who may not know, Chief Chukwuocha (White Lion), he hails from Ezeoke Nsu in Ehime Mbano Local Government Area, a successful  industrialist of repute who has helped to reduced unemployment in Nigeria by gainfully employing the youths in most of his organisation both in Nigeria and oversea.

His legendary philanthropy and humanitarian services knows no bounds as it cuts across clan, tribe or religion.  A  deeply religious young man, White Lion holds no bar when it comes to the kingdom ministry; he  supports the  Catholic, Anglican, Pentecostals,   orthodox  and non orthodox  churches. The state of the art grotto he built  for the  catholic community at Agbaghara Nsu in Ehime Mbano has remained indelible in the hearts of the Catholic faithful, not to talk of  regular support for his Anglican diocese.

As one of the  oldest members of All Progressives Congress Party in Ehime Mbano, White Lion  has unreserved love for the party. He has  in  various fora described  the leader of the party in Imo State , His Excellency, Sen. Hope Uzodimma, as astute politician,   a leader with dexterity and capacity  who is steadily transforming the state to an  enviable position  in the comity of states.

When he was asked why he bought nomination form on the platform of APC, he said, ” Because I am indebted to savage my people and give them good leadership and effective representation””.  The people only pray is  that he secures the ticket.

innonews - February 17, 2018 0
BY CHIEDU UZODINMA# Despite his open endorsement for the governorship ambition of his Chief of Staff, Uche Nwosu, the reaction that has trailed Governor Rochas...

innonews - February 21, 2018 0
A major milestone was achieved in the political annals of Imo State yesterday with the declaration by pan Orlu socio political group, Orluzurumee that...

innonews - March 2, 2018 0
A serving senator, a member of the House of Representatives and many other stalwarts of the Peoples Democratic Party, PDP are said to be...