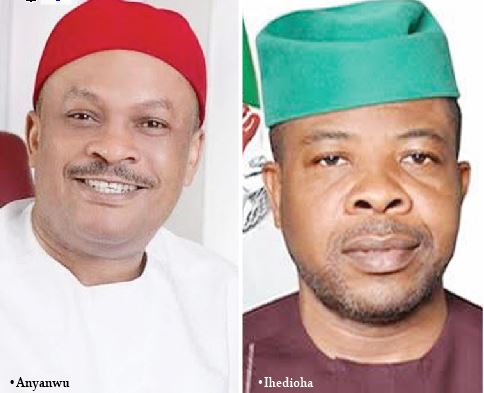 The cold war between former Governor of Imo State, Emeka Ihedioha and National Secretary of the Peoples Democratic Party, PDP, Senator Samuel Anyanwu, came to the fore again, at the weekend, at the inauguration of the Presidential Campaign Council, PCC, of the party in Imo State.

Ihedioha was named the leader of the Council in the State, a development which may not have gone down well the camp of the PDP National Scribe.

Ihedioha and Anyanwu, are leading contenders for the Imo PDP governorship ticket, ahead of the November 11, 2023 Imo governorship election.

Thugs had invaded the State party secretariat, along Owerri- Okigwe road to disrupt the inauguration of the PCC.

Sources accused loyalists of Anyanwu of recruiting the thugs, to express displeasure over how Ihedioha allegedly submitted all the names of the Atiku Presidential campaign Council  in the State, shutting out Senator Anyanwu.

The source said “It was Ihedioha who schemed out everyone and single-handely came up with the Atiku PCC list in Imo PDP and it was approved without the consent of the PDP National Secretary, who is from Imo State.

“The thugs apparently irked with the development stormed the party office to warn that the PCC appointment must be cancelled.

Anyanwu’s media aide, Ikenna Onuoha, in a statement in Owerri, refuted the allegation.

“The truth of the matter is that no such thing ever happened; the story is totally false, baseless and mischievous. Senator Anyanwu does not parade thugs and has never assigned anyone to act on his behalf. The purveyors of the falsehood are indeed cuplable of the allegation

“What actually happened as we gatherd is that leaders, critical stakeholders and prominent members of PDP in Imo State were said to have boycotted a purported inauguration of a campaign council for the PDP presidential candidate for criminal alteration

“This is because as reported, those earlier nominated and approved as members of the PDP Presidential campaign council in Imo State were said to have criminally removed and replaced them with people of questionable character leading to the altercation” part of the statement stated.

However, in a statement, Imo PDP State Publicity Secretary, Mr. Collins Opuruozor, said  “in strict compliance to the guidelines set by the Presidential Campaign Organization, His Excellency, Rt Hon Emeka Ihedioha CON, emerged as the Chairman of the Presidential Campaign Council in the State, while the immediate past State Chairman of the party, Chief Charles Ezekwem, was chosen as Director of Campaign”

“Imo PDP expresses satisfaction with the composition of the Presidential Campaign in the State and described the duo of Ihedioha and Ezekwem as round pegs in round holes. Our party heartily congratulates them and Other Directors and Members of Campaign Directorates on their new roles, and notes that the task of PDP recording landslide victory in Imo at the polls in 2023 is already accomplished”  the statement stated.

innonews - August 22, 2018 0
*BY RALPH EJIMKONYE* Chief Emmanuel Iwuanyanwu’s open endorsement for the governorship ambition of Senator Samuel Anyanwu has opened a floodgate of reactions from some party...

innonews - December 8, 2018 0
*BY RALP EJIMKONYE* Flags of the All Progressive Congress are now flying low in Imo State.