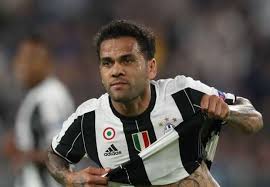 Dani Alves has said he is on his way out of Italian Champions, Juventus as he looks forward to seal a move to English premier league side, Manchester City

Alves has reportedly agreed a two year deal with the Premier League club . Alves thanked the Italian Champions for the year especially his teammates who welcomed him like the professionals they are, ” for a club that wins and reaches Finals”

“I think that my respect for this club and its supporters was my dedication, my passion and all my effort to make the club greater every single day.

“I apologise to the Juventus fans if sometimes they thought I had done something to offend them. I never had that intention, I just live very spontaneously and few people understand it… even though it appears that I am not perfect, my heart is pure.

“Today our professional relationship ends and I will carry with me all of those who with love and true heart make Juve a great club.

“As everyone knows, I always say what I think and feel… so I feel that I should say thank you to Mr Marotta for the opportunity he gave me, he’s a great professional and someone who loves his job like few others.

“I don’t play football for money, I play football because I love the profession and those who are part of it. I leave it up to you to judge what I have done and worked for.

“I LOVE FOOTBALL and money will never take me to any other place.”