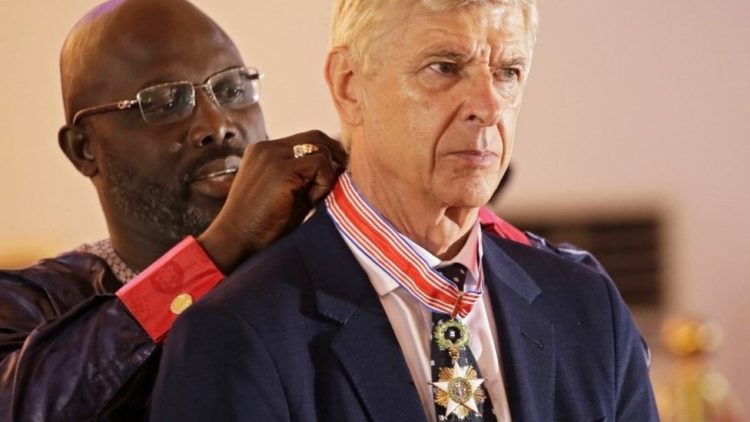 The award, it was disclosed, was for services to African football that included launching Weah’s own acclaimed career.

Wenger found Weah playing for Cameroon’s Tonnerre Yaounde and brought him to French side Monaco in 1988.

The move paved the way for the striker at some of Europe’s top clubs, including AC Milan, Paris St Germain and Chelsea.

In 1995 Weah was named World Footballer of the Year and won the Ballon d’Or, still the only African to win either award.

“You proved yourself as a teacher when you revolutionised forever the approach of scouting young talents all over the planet, particularly throughout Africa,” Weah said of Wenger during a ceremony in the capital Monrovia.

Wenger was named a Knight Grand High Commander of the Humane Order of African Redemption, the highest rank in Liberia’s Order of Distinction.

Thousands of spectators clapped and cheered as Wenger received his medal in a hall at the national stadium adorned with the national red, white and blue.

Thousands more listened to the ceremony on the radio in the stadium, once a shelter for people displaced by a civil war that ended fifteen years ago.

His unlikely rise, from kicking a ball on the dusty streets of a Monrovia slum to world fame, won him support in one of the world’s poorest countries.

Development in the West African country has been hobbled by the 14-year civil war that ended in 2003 and an Ebola outbreak which killed thousands from 2013-16.

“I think Wenger deserves it. If he had not spotted ambassador Weah in those days, he would not have reached this level,” said university student Cynthia Kollie.

Some took issue with the awards, saying the president’s choice was based on personal ties rather than on what the recipients did for the countr “President Weah is bestowing our nation’s highest honour on his two former football coaches who have made no direct impact or contributed to Liberia’s collective interest,” said Martin Kolle, a student. (Reuters/NAN)

Group: Why We Are Praying For Imo New Governor, Deputy To...

innonews - May 29, 2019 0
By Ikenna OriohaAs Governor Emeka Ihedioha and his deputy, Gerard Irona, were formerly inaugurated on Wednesday, May...

innonews - July 26, 2017 0
A Nigerian, Marvyn Iheanacho has been sentenced to life imprisonment for the death of his five year old son. Reports said the 39 year old...